Miller got lucky on multiple occasions during his 39-run knock and Klaasen says there was a certain no-ball and a free hit following that, which breathed life into South Africa's innings.

Coming in as a replacement of injured Quinton de Kock, Heinrich Klaasen handed South Africa their first victory in the ODI series against India. Building a 72-run partnership with David Miller, Klaasen took the hosts to a 5-wicket win that keeps alive the hopes for them to at least draw the series. Miller got lucky on multiple occasions during his 39-run knock and Klaasen says there was a certain no-ball and a free hit following that, which breathed life into South Africa’s innings.

“It was definitely a momentum changer for us, getting that free hit on David’s wicket. He’s a cool, calm and experienced cricketer and he just said, ‘Anything in our slot we need to back and whatever we decide to do, we need to do fully.’ So we were very calculated in our approach there. Maybe it didn’t look like it, but it was all calculated and planned out,” Klaasen told reporters, quoted Cricbuzz.

Klaasen played a peculiar shot to one of Yuzvendra Chahal’s wider deliveries, walking past his stumps to make room and pulling it over square-leg, and falling down as the ball touched the ropes.

“That’s where the gaps were, so I needed to do something about it. I can’t describe it but for me, that was my only boundary option, he bowled quite wide and got a lot of turn and bounce, that was my gutsy shot at that moment and I pulled it off,” Klaasen spoke about the shot.

Klaasen also says sweep-shot is something that comes to him naturally but he practiced to make it perfect.

“It comes naturally to me, but I work hard on it. Three years ago, we went to Sri Lanka on a National Academy trip. We learned all types of sweeps. Since then, I’ve brought it back into my game and it works, it takes off a lot of pressure. Especially against good spinners, it’s difficult to hit them down the ground if you don’t use your feet well. So that just changed up their lengths and it suits me a little bit better,” he said.

India’s steady start was disturbed by rain and the visitors collapsed when play resumed.

“That was a phenomenal 16 overs. I thought our death bowling in Cape Town was also very good, and that’s a good thing for South Africans to see, that our death bowling is picking up. Chris Morris and KG (Rabada) are bowling very well there so that obviously lifts our mood. I think they were looking at 340 at some stage, so yeah, all credit needs to go to the bowlers to restrict them and to get us back into the series,” Klaasen said.

A fortnight ago, the same Klaasen was not able to find himself tickets to the match. “I told my ‘meisie’ (girlfriend) that I didn’t have tickets to come to Pink Day,” he said. Then how did he cope with all the excitement and pressure of international debut?

“Talking to our spinning coach (Claude Henderson), I just said that I wanted to get the first knock out of the way, get settled with the nerves and all those things. It’s been a long time coming. It means the world to me, it’s better than a hundred, better than anything else to play for your country.”

The victory will sure bring back South Africa’s confidence, which faded since India’s triumphant run commenced.

“It’s a massive, massive confidence-booster for us. We didn’t have the confidence but just to get the first win has lifted the spirits in the change room,” Klaasen said. 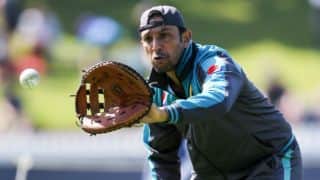