Playing in the 15th 50-over game, Klaasen achieved the feat against Australia in the first ODI of the three-match series.

The 28-year-old played a knock of 123 runs studded with seven fours and four sixes. He guided the side to post a total of 291/7 in their allotted 50-overs.

The right-handed batsman built a 149-run stand for the fifth wicket with David Miller. Miller was picked up by Pat Cummins in the 49th over. Miller played a knock of 64 runs before being caught by wicket-keeper Alex Carey.

South Africa won the toss and elected to bat first. The team had a poor start as debutant Janneman Malan was sent back to the pavilion by Mitchell Starc on a golden duck.

Skipper Quinton de Kock was dismissed by Josh Hazlewood after scoring 15 runs. Temba Bavuma scored 26 runs before being bowled out by Cummins. Another debutant Kyle Verreynne played a 48 runs innings. He was caught by Mitchell Marsh off Cummins. This was Cummins’ 100th ODI scalps. 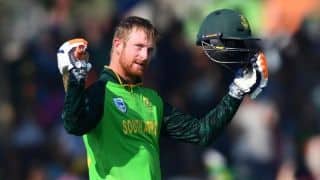 Difficult to put in words: Klaasen on maiden century