Former Australia Test captain Greg Chappell believes that the reason why a modern batsman struggles to effectively negotiate swing bowlers is largely due to helmets.

Former Australia Test captain Greg Chappell believes that the reason why a modern batsman struggles to effectively negotiate swing bowlers is largely due to helmets.

Chappell, who played 87 Tests and 74 ODIs during his 13-year international career, reckons the weight of a modern helmets throw batsman off-balance, focring them to stay more upright and this hindering mobility.

“Batting’s changed, there is no doubt about that,” Chappell was quoted as saying by CricketNext on Tuesday. “There are some factors that are probably not well understood. The things that I see that have made a big difference I think helmets have had a much bigger impact on batting than we realise.”

“The weight of those helmets makes a big difference to your centre of gravity and balance. Because of the weight of the helmet, batsmen tend to stand up much straighter. That changes your ability to be able to move.”

However, at the same time, Chappell says batting has become slight easier due bats becoming thicker, but not heavier, allowing for even mishits to produce favourable results. “The bats, they have definitely changed. The thickness of the bats they aren’t much heavier than the ones we used but the weight and the mass of the bat is spread very differently. So you get better results with mishits than we used to do,” he said.

The evolution of One-Day cricket has also played its part, Chappell claims. The pitches for limited-overs cricket are more batting-friendly which has had a domino effect on those for prepared for Test cricket.

“There are not the demands to get as close to the ball when the wickets are good and because of one-day cricket, the preparation of pitches for one-day cricket has had an impact on the Test pitches for a long period of time,” he said.

He further added, “Batsmen have had some pretty good conditions to bat in, so they have probably got away with not being as precise as batsmen once had to be because of the conditions a lot more grass on the pitches in the days gone by, which meant the ball stayed newer and a little bit more swing, a little bit more movements. Because the bats demanded that you hit the ball in the middle, players learnt to get closer to the ball, well forward and well back. They are things that have changed.” 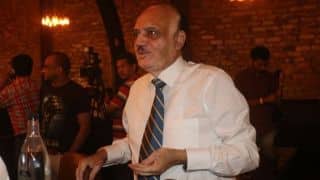