Full details of when, where and how you can watch and follow 2nd unofficial Test between India A and South Africa A at Mysuru

IND A vs SA A, 2nd unofficial Test, Day 2, India A vs South Africa A LIVE streaming: Teams, time in IST and where to watch on TV and online in India

WICKET – Mohammad Siraj with an early breakthrough. He gets rid of Pieter Malan for 6. South Africa A 20/1

ALL OUT – India A all out for 417. Mohammed Siraj is the last batsman out, cleaned up by Dane Peidt. Three wickets each of Wiaan Mulder and Peidt. For India A, Shubman Gill top scroed with 92, Karun Nair made 78, Shubman Gill 68 and Wriddhiman Saha 60

WICKET – Kuldeep Yadav make two of 17 balls before falling to Dane Piedt. India A lose their seventh wicket. Jalaj Saxena at the other end is batting on 28 off 79 balls. India A 371/7

WICKET – India A have lost Shivam Dube in the second session. The hard-hitting Mumbai allrounder departs for 68 off 84 balls. Wiaan Mulder is the wicket-taker.

DUBE IN FIRE – Shivam Dube is taking on South Africa A bowlers as he races to 63 off just 74 balls with the help of nine fours and a six. Jalaj Saxena at the other end has the best seat in the house and is on 14 off 41 balls. India A 339/5

WICKET – First success for Vernon Philander as he removes Wriddhiman Saha for 60. The wicket-keeper batsman played a good hand and tried to accelerate the scoring. His 60 came off 126 balls with the help of seven fours. Shivam Dube, on 33, is now joined by Jalaj Saxena in the middle. India A 292/5 in 90 overs

WICKET – India lose an early wicket on Day 2 as Karun Nair departs without adding any run to his overnight total of 78. Second wicket in the match of young allrounder Wiaan Mulder. At the other end, Wriddhiman Saha has reached his fifty and India A have gone past the 150-run mark. Saha is joined in the middle by Shivam Dube. India A 254/4

Shubman Gill shone again with a fine 92 as India A reached 233 for three by the end of first day’s play in the second unofficial Test against South Africa A in Mysuru on Tuesday.

Opener Gill struck 12 fours and a six before getting out eight runs short of a century. This is the second time he has missed out on the three-figure mark, having scored 90 in the first match at Thiruvananthapuram.

The out-of-favour Karun Nair was batting on 78 and skipper Wriddhiman Saha was on 36 at stumps, which was called after 74 overs due to bad light.

Sent in to bat by the visiting captain Aiden Markram, India A didn’t enjoy the best of starts with Bengal opener Abhimanyu Easwaran (5) falling leg-before wicket to Lungi Ngidi in the sixth over.

Gujarat batsman Priyank Panchal, a prolific scorer in the domestic circuit like Easwaran, batted for 39 balls before getting dismissed to leave India A at 31 for two.

What: India A vs South Africa A, 2nd unofficial Test, Day 2

Live updates: India A vs South Africa A, Day 2

The India A team made a few changes with Saha coming in for KS Bharat and Kuldeep Yadav, who is in the squad for the Tests against South Africa replacing K Gowtham. Umesh Yadav, too, was brought into the playing XI in place of Shardul Thakur. 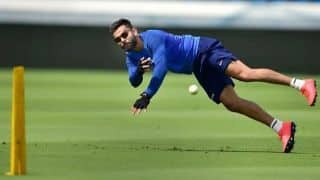