Karun Nair unbeaten on 78 has the company of Wriddhiman Saha, who is batting on 36

IND A vs SA A, 2nd unofficial Test, India A vs South Africa A LIVE streaming: Teams, time in IST and where to watch on TV and online in India

STUMPS – India finish at a healthy 233/3. Karun Nair unbeaten on 78 has the company of Wriddhiman Saha, who is batting on 36. The partnership so far has yielded 67 runs. Earlier in the day, India A rode on Shubman Gill’s 92, but the Punab youngster missed out on a hundred for the second time in as many matches. It was a tough day out for South Africa A bowlers with Lungi Ngidi, Wiaan Mulder and Lutho Sipamla  returning one wicket each, while Vernon Philander went wicketless in his 12 overs.

WICKET – Shubman Gill misses out on yet another century. He goes for 92, after scoring 90 in the 1st unofficial Test. Lutho Sipamla with the wicket. At the other end, Karun Nair has gone past the 50-run mark. India A 173/3

HALF CENTURY – That’s fifty up for Shubman Gill. Talk about seizing the opportunity.  The younster has given a good account of himself against the likes of Lungi Ngidi and Vernon Philander – South Africa internationals – to reach the milestone. He justifies his selection to India’s squad for the South Africa Test series. India A 82/2

WICKET – Priyank Panchal too fails to seize the opportunity as he  departs for 6 to Wiaan Mulder. India A 40/2

WICKET – India A have lost Abhimanyu Easwaran early for 5. South Africa international Lungi Ngidi with the wicket ,trapping the Bengal opener in front. Shubman Gill is joined by Priyank Panchal in the middle. India A 17/1 in 10 overs

5 overs – Ten runs on the board for India A as Abhimanyu Easwaran and Shubman Gill open the innings for India A.

What: India A vs South Africa A, 2nd unofficial Test

Live updates: India A vs South Africa A

Young Shubman Gill will be the centre of attraction when a dominant India A lock horns against South Africa A in the second and final unofficial Test of the two-match series, starting in Mysuru from Tuesday.

READ: Ready to make the transition as an India player – Gill

After pocketing the five-match unofficial ODI series 4-1, India A continued their domination over South Africa A in the Test rubber by winning the first game by seven wickets. And the Indians would look to draw curtains on the series on a perfect note with yet another complete performance.

But the focus will be on 19-year-old Gill, who has broken into the Indian Test squad for the three-match series against the Proteas, starting on October 2 in Visakhapatnam.

Gill, who was captain in the first match, made a superb 90 en route to the comprehensive win.

Experienced Bengal wicketkeeper Wriddhiman Saha will take over the captaincy from Gill, while openers Priyank Panchal and Abhimanyu Easwaran have also been drafted in.

Both Panchal and Easwaran, who too are knocking on the doors of the senior Test side, will be keen to showcase their potential after Gill leapfrogged them into the five-day team. 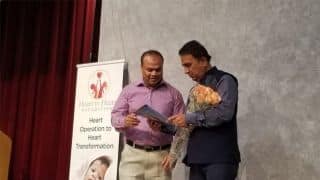