The Hobart Hurricanes require just 46 more off seven overs to reach the final.

Hobart Hurricanes have timed their chase of 142 in 20 overs superbly so far. They are moving comfortably towards the target, with the score at 96 for the loss of two wickets at the end of 13 overs. They require another 46 off 42 balls.

After the opening pair of Ben Dunk and Tim Paine got them off to a flyer, Dunk (30 off 20 balls) lost his wicket in the sixth over, but the Hurricanes had already crossed the fifty mark by then. Paine carried on, and was joined by Pakistan all-rounder, Shoaib Malik, but he didn’t last long, as he fell to some delightful orthodox spin bowling from the young James Muirhead.

Muirhead has looked the only bowler in the Melbourne Stars’ ranks, who disturbed the batsman and looked likely to take a wicket. The likes of Lasith Malinga and John Hastings haven’t caused much trouble. But even his third over went for 15 runs.

Paine, along with skipper George Bailey are moving along smoothly to what could be an easy victory. 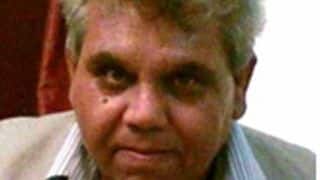