Tim Paine started to stroke the ball well after Ben Dunk was dismissed, as Hobart Hurricanes looked to consolidate after a lackluster start against the Northern Knights in the ninth match of the Champions League T20 (CLT20) 2014 at Raipur on Tuesday. Paine unleashed a flurry of fours and sixes after the dismissal of Dunk an effort to build momentum. 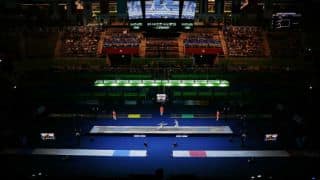