Darren Sammy scored a six off the final ball to take his tally to 52 off just 19 balls, which included 6 sixes and a couple of boundaries.

Darren Sammy and James Franklin ensured that Hung Hom JD Jaguars start off with a win in Hong Kong T20 Blitz 2017. At one point it looked as if the rains would lead the contest to a washout, but thankfully there was some action for the hundreds waiting right from 9 AM. The cricket, too, was of the highest quality. It saw New Zealand all-rounder Franklin and two-time World T20 winner Darren Sammy end the innings with an unbeaten 102 off just 36 deliveries, which took Hung Hom Jaguars score to 145 for 3 in a rain-marred, 11-overs-per-side match. Sammy scored a six off the final ball to take his tally to 52 off just 19 balls, which included 6 sixes and a couple of boundaries.

Franklin, too, played his part slamming a 25-ball fifty, eventually finishing with 58 off 27. The off-spinners Azeem Rafiq and Papua New Guinea skipper Assad Vala were the only wicket-takers for Galaxy Gladiators. Only Anshuman Rath stood tall for Galaxy Gladiators. His 26-ball 45 kept the side from Lantau in the hunt. Hopes of his side winning diminished after his shot was pouched by Johan Botha off Imran Arif. Lantau kept losing wickets at regular intervals. Their star players Kumar Sangakkara and Jesse Ryder failed to have any significant impact on the game. Sangakkara did play a couple of his trademark cover drives, but his stay at the crease was short-lived.

In the end, the target got way out of control. They needed 34 to win off the final over. Despite the ground being small (not more than 55 metres straight to be precise), Jaguars went on to register their first win by 27 runs and get off the mark in this edition of the Blitz. 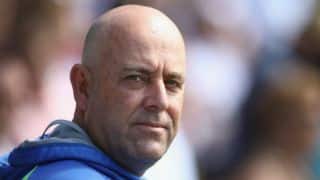