City Kaitak beat Hung Hom JD Jaguar by 6 wickets in match 8 of the Hong Kong T20 Blitz 2017 at the Mission Road Cricket Ground at Mong Kok to keep their hopes of making it to the final alive.

City Kaitak beat Hung Hom JD Jaguar by 6 wickets in match 8 of the Hong Kong T20 Blitz 2017 at the Mission Road Cricket Ground at Mong Kok to keep their hopes of making it to the final alive. Kyle Coetzer was the star for Kaitak as his 45-ball 58 was instrumental in ensuring that his side got over the line. Having been given a stiff target of 194, thanks to a brilliant unbeaten 120 off 62 from Nizakat Khan, Kaitak got off to an excellent start thanks to Tillakaratne Dilshan, who scored a quick fire 12-ball 29. Kaitak kept getting runs at a quick rate and it was Coetzer, who kept the innings together, batting through the innings. HK T20 Blitz 2017, Match 7: Samuels all-round show inspires Kowloon Cantons to 44-run win over Hong Kong Island United

With this win, Kaitak have four points from three games. A win in the match on Sunday against the Hong Kong Island United may just be enough to take them to the final of the tournament. Jaguars on the other hand have done all they can and must wait for the results of other matches to see if they have qualified for the final or not. However, Jaguars bowlers were less than impressive, with everyone other than Johan Botha going over 10 an over.

Nizakat, whose century went in vain today, said that he is disappointed with the result but glad that his side played some good cricket. It s really disappointing losing a game after you score a hundred. We played good cricket to be honest, just wasn t our day, said Nizakat after the game. We bowled too full and did not execute our plans well, he added. Jaguars do not have any games left now. They have four points from four matches and will need a favour from other sides to ensure that they make it to the final on Sunday. Earlier, Jaguars won the toss and elected to bat first.

Man of the match: Nizakat Khan 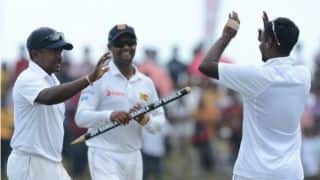 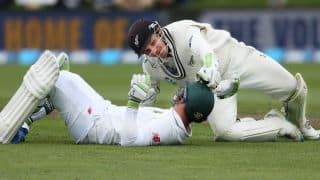