Taking a-not-so veiled dig at the Sri Lanka selectors, Lasith Malinga said the kind of treatment meted out to him in the recent past doesn't not give him enough confidence.

Since his international comeback last month, Sri Lanka pacer Lasith Malinga has been making all the right noises. Against Bangladesh, in the Asia Cup opener in September, Malinga struck twice in his first over and finished with 4/23. On Saturday, in a rain-curtailed affair, he again proved why he was regarded as the death-bowling specialist in his prime, as his figures of 5/44 restricted England from posting an imposing target in the second ODI at Dambulla.

In four ODIs since his return, the 35-year-old has taken 10 wickets and despite Sri Lankan team’s recent struggles, he isn’t sure of making it to the ICC World Cup 2019 to be hosted by England.

Taking a-not-so veiled dig at the Sri Lanka selectors, Malinga said the kind of treatment meted out to him in the recent past doesn’t not give him enough confidence.

“I feel that if I get the chance to play the World Cup, I will,” Malinga was quoted as saying by ESPNcricinfo. “It will be my last World Cup. I’m not expecting to get the chance, given the kinds of things that have happened to me over the recent past. But I will take it if it is given.”

Malinga skipped Sri Lanka’s domestic one-day competition this year and instead offered his services to Mumbai Indians as their bowling consultant. He then later played at the Canada Global T20 league and domestic T20 competition. Impressive performances at the two leagues paved a way to his return.

Malinga says all he can do his perform and the fact that he’s nearing the end of his career keeps him motivated to get wickets. “The selectors are entitled to make those decisions. I’m just a player. My only job is to play when I get the chance. When I was out of the team, I went and played in Canada. I also played the district competition and got the highest wickets. Thanks to those performances I got another chance at this level. Because I’m nearing the end of my career I’m motivated to get wickets,” he said. 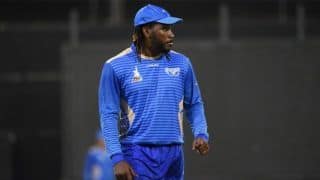