Umesh bowled a full delivery outside the off stump which Hope carved to the point boundary as the match ended in a tie.

Shai Hope, whose unbeaten 123 helped West Indies level scores in the second ODI against India at Vizag on Wednesday was anticipating a wide yorker in the last ball of the run chase.

India captain Virat Kohli s gargantuan 157 powered the hosts to an imposing 321/7. Kohli en route became the quickest player to reach 10,000 ODI runs surpassing the record in his 205th innings, previously held by Sachin Tendulkar, who achieved the feat in his 259th innings.

West Indies centurion in the first game at Guwahati, Shimron Hetmyer set the tone perfectly with a brisk 64-ball 94. Hope and Hetymer’s massive 143-run partnership for the fourth wicket helped the Windies narrow the equation down to five off the last ball.

Pacer Umesh Yadav bowled a full delivery outside the off stump which Hope carved to the point boundary as the match ended in a tie. “Last ball I knew a wide yorker was coming at the end, and I had to get bat on the ball. I didn’t get enough bat, but it was enough,” Hope said on Wednesday.

“Definitely, such knocks improve your confidence. You have to gain after every innings. It was a matter of time before I got a big score. But we need to be more consistent as a team,” he said.

Talking about batting with Hetmyer, Hope said, It’s pretty different with him, he likes to keep the scoreboard ticking. As long as we take it to the last five overs, we knew we stood a chance,” he said.

“There was a change in approach after that [Hetmyer’s dismissal]. We needed to take the innings deep.

India lead the five-match series 1-0 with the third on October 27 at Pune. 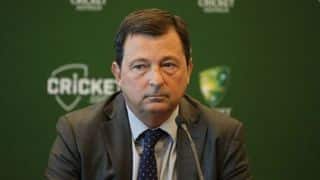