The Tamil Nadu batsman has been India's fourth most successful opener in Test cricket with 3880 runs against his name at an average of 39.19 while opening the batting.

Although he has not played any international cricket since December last year, Murali Vijay is not fretting over his India comeback.

The right-handed opener, who was recently signed by English county side Somerset for three matches, said that he plays the game for passion and pride.

“I play cricket just for pride and sheer passion for it. I do not look forward to play for India or world level. My funda is to play cricket at a higher level. So, any cricket is good for me and I am looking forward to contributing for the teams I play for,” Vijay was quoted as saying by ANI.

“This is what I have done over a period of 15 years. So, obviously, nothing changes in that aspect of it. But obviously, opportunities create more experience and I am looking forward to one,” he added.

The Tamil Nadu batsman has been India’s fourth most successful opener in Test cricket with 3880 runs against his name at an average of 39.19 while opening the batting.

While he made it clear that he still has the desire to play for India, he is looking forward to contribute to the game in other ways.

“Of course, I am saying that I do not put any limitation on my dream. I have given four come back (to Indian cricket team) and there is no pressure. I know how to do that and I want to contribute in whichever team I play for. I want to make the team win and also get the youngsters in the right mindset. So, these are the contribution I can give to cricket,” concluded Vijay. 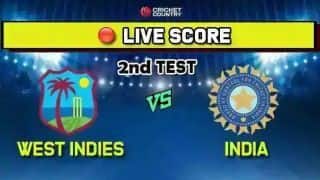