Khaleel Ahmed has expressed his desire to represent the Indian cricket team for a minimum of 10 years.

Fresh off the news regarding his India call-up, Khaleel Ahmed has expressed a desire to represent the national team for a minimum of 10 years. The 20-year-old left-arm pacer, who has impressed with his exploits with the white ball for India A this year, was drafted in India s 16-member squad for the Asia Cup starting September 15 in the UAE. His addition adds to an already formidable Indian pace attack that includes Jasprit Bumrah, Bhuvneshwar Kumar and youngster Shardul Thakur.

“Now that I have got selected, I want to play maximum number of matches for India and not just the Asia Cup. I want to play for at least 10 years & take as many wickets as I can,” Khaleel told ANI.

Now that I have got selected, I want to play maximum number of matches for India & not just the Asia Cup. I want to play for at least 10 years & take as many wickets as I can: Khaleel Ahmed, cricketer on being selected for #AsiaCup2018 pic.twitter.com/wv9aqZelJO

Khaleel is a 20-year-old left-arm pacer who has earned praise from the likes of Zaheer Khan and Rahul Dravid.

For those not aware, Khaleel is an out and out fast bowler. Not medium pace, fast. He recently played in the Quadrangular trophy for India A where he picked up seven wickets in four matches, including 3/45 against South Africa A in Bengaluru in a losing case. Prior to that, Ahmed played five List-A matches for India A in England and impressed with eight wickets.

Khaleel s ability to bowl fast goes back to his days of playing tennis ball cricket when he would play on cement pitches and bend his back. During the last edition of the Syed Mushtaq Ali Trophy in January, Khaleel took 17 wickets and generated some serious pace, clocking 148 in one of the games. During his close association with mentor Zaheer while playing for the Delhi Daredevils, the former India fast bowler rated Khaleel a very bright prospect.

With 12 wickets in three innings, including 3/29 against Sri Lanka in the final of the Tri-Nation Under-19s tournament in Colombo, Khaleel broke into India s Under-19 World Cup squad in 2016. In the much-awaited tie against Pakistan, Khaleel picked up 5/30 and won the match for India. 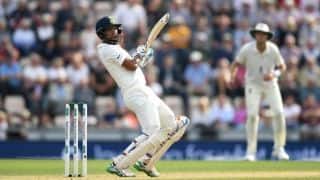