I wish no cricketer goes through what I have: Mishra

I wish no cricketer goes through what I have: Mishra

He has had the West Indies batsmen in knots in the ongoing ODI series but not so long ago, Indian leg-spinner Amit Mishra was considering hanging up his boots out of sheer frustration at being dropped despite decent performances. 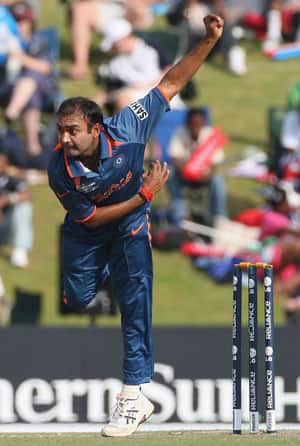 He has had the West Indies batsmen in knots in the ongoing ODI series but not so long ago, Indian leg-spinner Amit Mishra was considering hanging up his boots out of sheer frustration at being dropped despite decent performances.

The affable spinner’s nine wickets at an average of 17.00 in the ongoing series exceed the value the figures can ever suggest. Yet, Mishra lives with the dictum of his day-to-day philosophy.

“I once took seven wickets and scored a 50 against Bangladesh in a Test and was promptly dropped in the next game,” recalled Mishra.

He could have also mentioned his dramatic first year in Test cricket in 2008 when he took 20 wickets in five games against Australia and England and yet was sent to cool his heels for the entire next year.

It is not as if he has been compensated in one-day internationals. He made his ODI debut in 2003 and after just two games was banished for more than six years.

He did have his shoulder injury to contend with but he was still picking wickets by bucketful in domestic cricket.

“I wish no cricketer goes through what I have in my career,” says the 28-year-old cricketer.

“But for my family who egged me on and Mr Ranbir Mahendra (Haryana cricket supremo) I would have hung my boots long ago.”

Mishra is mindful that during this spell of 2003-09, Anil Kumble made a mighty return and Harbhajan Singh was still on top of his craft.

Also only one spinner is usually preferred in Tests abroad. Yet the feeling lingered that he was being unfairly treated with.

“I just let out my frustration on a cricket ball. I bowled and bowled and bowled. During matches, in nets and many a time alone. I worked on my leg-spinners, drifters, googly, variations in pace, degree of spin, everything,” says an eager-faced Mishra who has nearly 400 first-class wickets to show for his 11-year toil.

Mishra was finally thrown a lifeline in the form of IPL.

He was picked up cheaply by Delhi Daredevils in the first year auction in 2008 but his impressive hauls, including two hat-tricks, have ensured he could no longer be ignored so brazenly.

Yet it hurt him immensely that he wasn’t part of India’s World Cup squad as Piyush Chawla was preferred to him.

However, he got his break in the present series and has been impressive to the extent that legendary opener Sunil Gavaskar feels he ought to be on plane to England later in the summer.

Having learnt the bitter lessons, Mishra now believes only wickets can give him a good run in international cricket.

“Economy is alright but wickets matter more to me. There’s no point in going for zero for 45, it’s better to have three for 50. It’s good for you, it’s good for team.”

Says Eric Simmons, India’s bowling coach, “Mishra is very confident, very aggressive. He gets a lot of drift which is always a very good sign for a leg-spinner.”

Mishra’s approach has helped India as many a time in the past, the middle overs were passive periods for the team. Most opposition could recover from poor starts only because there was nobody to pick wickets in the middle overs.

“Even though I can bowl three variations of googly, my stock bowl is leg-break. I feel my strength is the loop and the drift and dip which accompany it,” remarked Mishra.

His 36 wickets from 10 Tests compare favourably with his idols Shane Warne (25 wickets), Muttiah Muralitharan (40) and Harbhajan Singh (38) at the same cut-off point.

Kumble alone is markedly superior at 53 Tests from 10 matches.