Bell has scored 871 runs this season, the most in Division 2, and the second-most across Divisions.

Ian Bell may be 36, but that has clearly not affected his hunger for runs. Playing for Warwickshire at Colwyn Bay on Thursday, he slammed 204, outscoring Glamorgan (203) on his own. In the process he first reached 20,000 First-Class runs, then became the leading run-scorer of Division Two of the ongoing County Championship. Bell now has 871 runs this season at 62.21 with four hundreds. Even in Division One, only Rory Burns (961 at 64.06) has more runs.

England‘s openers Keaton Jennings and even Alastair Cook have failed to impress throughout the ongoing Test series, which has definitely opened up a spot for Burns. The middle-order, too, has not exactly looked particularly solid, what with Joe Root failing to tee off. Jonny Bairstow, Jos Buttler, Ben Stokes, and Moeen Ali are excellent cricketers on their own, but between them they do not form the strongest possible middle-order England can provide.

Bell is himself keen on a comeback, and has found support from Steve Harmison.

“I’m happy. I’m playing well, I’m moving well and enjoying my cricket and the expectation and drive is here,” Bell told BBC WM after his double-century. “Who knows what the next 12 months holds? [If England call] I’m sure I’ll answer the phone.” 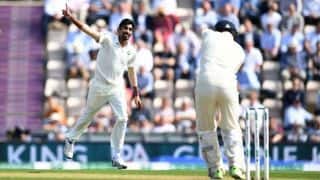