Steve Harmison believes that the discarded Ian Bell could offer balm to England s middle-order batting struggles in the ongoing Test series with India. Bell has not played for England since the selectors dropped him for the tour of South Africa in early 2016, shorty after he enjoyed his fourth Ashes series triumph.

At the age of 36, Bell is averaging 51.30 in the County Championship for Warwickshire, with three centuries, including two in the same game after going more than two seasons without one. Since he last played a Test, England s selectors have picked 13 different batsmen in the middle order.

With the current lineup still failing to function properly, and doubts over Jonny Bairstow s participation in the remaining two Tests at Southampton and Kennington Oval, there have been murmurs of Bell – who recently spoke of a desire to play Tests for England again – getting a chance to add to his 118 Test caps. Former Ashes-winning fast bowler Harmison, speaking to ESPNcricinfo, said that it was a distinct possibility given the fragility of England s middle order.

There s talk of Jonny Bairstow now playing the next Test match because of a broken finger, so then who replaces Jonny Bairstow? There s talk about Alastair Cook not playing, so there s already a gap coming there. There s even talk of Ian Bell coming back into the Test arena at 36, that s how much England needs a bit of stability in that middle order, he said on Tuesday.

When you look at it like that, England s top six batsmen are going to be looking over their shoulders thinking right, I better score some runs here because if I don t, Ian Bell walks back into the Test arena, gets a hundred, he ll stay for a while . Bell has got 8,000 Test runs, so in his eyes he shouldn t have been dropped in the first place.

England, despite leading 2-0 in the five-match series, have batting concerns. Bairstow is their leading run-getter with 206, followed by Chris Woakes with 145. Joe Root has made 131 runs, Jos Buttler 64, Dawid Malan 28 and Ben Stokes 37. With Cook averaging 16 and in doubt for the fourth Test owing to the birth of his third child, and his opening partner Keaton Jennings averaging 18.80, Harmison said plenty of questions would be asked of the players and selectors. 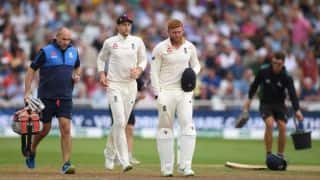