India vs England: Jonny Bairstow hurt the middle finger of his left hand on Day 3 of the Trent Bridge Test against India.

England are not only facing a daunting task of chasing a world record total at Trent Bridge, they are also left with the prospect of being without Jonny Bairstow for the remainder of the ongoing five-Test series against India. Bairstow, England’s first-choice wicketkeeper and so far, their top-run getter of the series, fractured the middle finger of his left hand on Monday during the 44th over of Indian innings and spent the rest of the day watching the proceedings from the dressing room.

Guardian quoted sources as claiming that Bairstow has no chance of playing the final two Tests at The Rose Bowl and Kennington Oval.

Bairstow copped the blow off a James Anderson delivery and was treated on the field before being taken to hospital for X-rays which confirmed a hairline fracture. However, assistant coach Paul Farbrace is hopeful that the 28-year-old will be available to bat if needed as England chase a record 521 with two days still remaining in the third Test.

“There is a fracture in the tip of his finger, and the doc s been working on him this evening to relieve a bit of pressure in the nail, so hopefully when needed he ll be OK,” Farbrace told reports on Monday.

“I’m no expert on broken fingers but because it’s not a displaced break, then he should be OK, and it’s just a case of managing the pain level as opposed to doing any further damage. There will be a big bit of plastic stuck over his glove. Let s see how he goes over the next couple of days. If there was a risk of making it worse, he wouldn’t bat.”

Bairstow is positive but will take a call whether he can bat only on the fourth morning of the Test. “It [the ball] wobbled and I just copped it on the end. It is part and parcel of this job. We are going to see how it is in the morning. It is a fracture but it’s not displaced and that is a big thing. We are hopeful a bit more ice overnight and some protection will help,” he said.

Farbrace, however, did not commit anything on Bairstow’s availability for the rest of the India series. “A lot will depend on how the next few days go, and the soreness in terms of catching balls on a consistent basis. We’ll have to see how he goes,” he said. 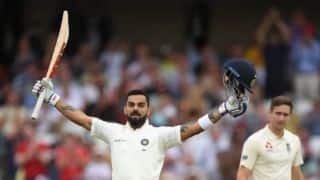