Bairstow was struck on his left middle finger during the third morning s play against India at Trent Bridge.

England wicketkeeper-batsman Jonny Bairstow, who was sent to a Nottingham hospital after being struck on his left middle finger during the third morning s play against India at Trent Bridge, has suffered a fracture.

The ECB confirmed that Bairstow, who copped a blow behind the stumps off the final ball of James Anderson s 10-over spell on Monday, was taken to hospital for an x-ray and the scans revealed a small fracture, raising concerns of his future involvement in the Test and the reminder of the series.

As the Trent Bridge pitch started to agitate on the third morning, several deliveries kept low off the England pace bowlers. One such delivery from Anderson beat Cheteshwar Pujara and as it deviated past the batsman’s bat it surprised Bairstow, who was hit on his left hand and immediately fell to the ground in pain.

After a brief inspection from the England physio, Bairstow walked off the field in pain. Jos Buttler took over the wicketkeeping duties as soon as Bairstow was forced off. 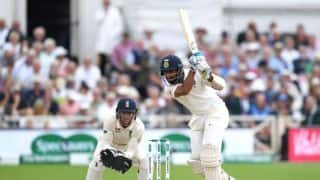