New Zealand coach Mike Hesson has said his side may not be" the sort of guys who wander around like peacocks" but "are in with a chance" of winning the ICC Champions Trophy 2013. 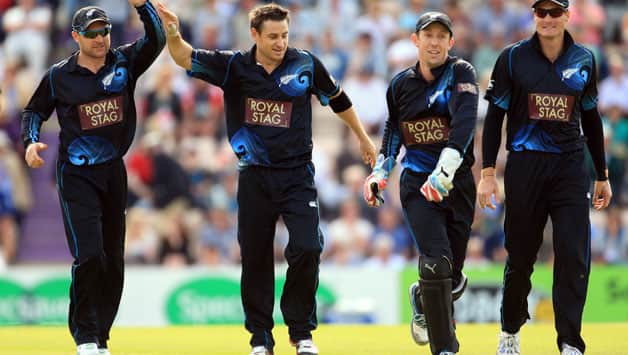 New Zealand coach Mike Hesson has said his side may not be” the sort of guys who wander around like peacocks” but “are in with a chance” of winning the ICC Champions Trophy 2013.

The Black Caps, who play Sri Lanka in their tournament opener in Cardiff on Sunday, go into the competition featuring the world’s top eight 50-over sides on the back of a 2-1 One-Day International (ODI) series win over hosts England.

“I think the ability to play three ODIs against a hugely competitive side, full houses, some real intensity, is great preparation for us,” Hesson said on Thursday.

“We are confident. We are not the sort of guys who wander around like peacocks and get too excited but we are playing good cricket and we are in with a chance.”

New Zealand, however, have lost their last six completed ODIs against Sri Lanka and with just the top two teams from each of the two groups of four going through to the semi-finals, Hesson knows his side can ill-afford a slip-up on Sunday.

“It’s as close to a knockout competition as you can get. We are certainly not thinking two weeks ahead. We are thinking about Sri Lanka in Cardiff. If we do that well, then we give ourselves another opportunity against (Group A rivals) Australia at Edgbaston and then a chance to have another crack at England.

Hesson added: “They’ve made four of the last (six) ICC finals, so they are a pretty good side to start with. They’ve got aggressive batsmen at the top of the order, experience in the middle with Kumar Sangakkara and Mahela Jayawardene, so they are a good unit.

“Their spin bowling takes wickets and they’ve got the Lasith Malinga factor,” said Hesson in a reference to the unorthodox, ‘slingshot’ seamer. “When he gets it right, he’s pretty tough. You know you’ve got to play extremely well to beat them.”

Sachitra Senanayake is the latest impressive spinner to emerge from Sri Lanka’s production line of slow bowlers but Hesson said: “They’ve got Rangana Herath, Jeevan Mendis, Tillakaratne Dilshan is useful as well. You could conceivably be facing 30, 35 overs of spin… We need to be proactive against spin.”

And Hesson said a side led by innovative captain Brendon McCullum would also look to attack Sri Lanka in the field.

“We’ll be aggressive against them. We won’t want to sit back. We’ve got some fields that we will set to try to put pressure on them and hopefully do that before they (the Sri Lankan batsmen) get themselves started.”

Hesson said the thing that had delighted him most about the recent series win over England, albeit they lost the ‘dead’ match at Nottingham’s Trent Bridge ground by 34 runs on Wednesday, was not the batting nor bowling but New Zealand’s fielding.

“The one thing I’m really pleased with is that we are aggressive in the field and we are saving a heck of a lot of runs. We saved 12 runs in the field last (Wednesday) night, which was probably as good as we’ve been for four years and over the series we were saved about 30 runs.”

New Zealand, who won this tournament in 2000, will also hope Martin Guptill maintains the form that saw him score 330 runs for just once out in the England series, including an unbeaten hundred at Lord’s and a national record 189 not out at Southampton last weekend.

“His balance is exceptional, he’s hitting the ball cleanly. He’s a quality ball-striker but his decision-making the last few weeks has been outstanding,” said Hesson. “Once he got a bit of confidence at Lord’s he was away, so hopefully he has a good tournament.” 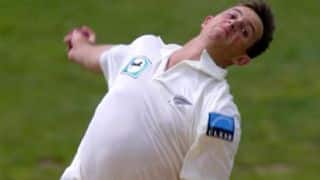 The name is Bond. Shane Bond.