The West Indies team will continue their preparation for the ICC Champions Trophy 2013 at the Cardiff Wales Stadium as teams continue to arrive for the prestigious tournament. The West Indies team will continue their preparation for the ICC Champions Trophy 2013 at the Cardiff Wales Stadium as teams continue to arrive for the prestigious tournament.

The West Indies players were the first of the eight nations contesting the one day tournament to arrive in Cardiff and held a full session Monday, the day after touching down on Welsh soil.

The Australians are the second to arrive and will train at the home of Glamorgan Wednesday morning.

The Windies squad, under the guidance of Head Coach Ottis Gibson, went through their drills at the Swalec Stadium in Cardiff — where they will face Australia in their first official warm-up match Saturday.

Gibson has been at the helm for over three years and said one of the keys to success in this tournament is proper preparation. The 44-year-old is familiar with conditions in Wales, having played for Glamorgan in the English County circuit in the 1990s.

The West Indies held a camp at the Sagicor High Performance Centre in Barbados last week before they travelled to Wales.

The tournament will be played across three venues — Cardiff Wales Stadium, Edgbaston and The Oval — from June 6-23. The Windies have been drawn in Group B alongside the Indians, the Pakistanis and the South Africans.

The West Indies won the ICC Champions Trophy back in 2004 — when Brian Lara’s team beat England in the final at the Oval.

Several members of that squad, including skipper Dwayne Bravo will play in the upcoming tournament. 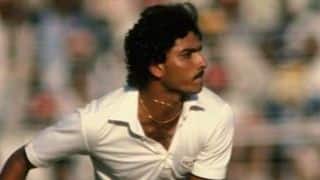 Ravi Shastri: One of two Indians with 2000 runs and 100 wickets in both Tests and ODIs