ICC Champions Trophy 2017: Australia are focusing on the tournament, not pay dispute with CA, says Steven

Steven Smith has criticised the arguments of Cricket Australia (CA) in the ongoing pay dispute on the eve of their first match in the Champions Trophy.

Birmingham: Australia captain Steven Smith has criticised the arguments of Cricket Australia (CA) in the ongoing pay dispute between the players and the board on the eve of their first match in the Champions Trophy. The CA has argued that it cannot increase the players’ current salaries as more money is needed to fund the game at the grassroots. Smith however, challenged the CA’s statement, asserting that the players have chipped in with significant contributions to the grassroots programmes. “I’m not sure I completely agree with that. If we look back at the last MoU I think players gave back $10 million to grassroots cricket, which is quite significant,” Smith told the media here on Thursday. FULL CRICKET SCORECARD: Australia vs New Zealand, ICC Champions Trophy 2017 – Match 2 at Edgbaston

“We’re right behind [the CA] and what they are trying to do for the players and as partners of the game as well. We fully support them in everything they are doing,” he added. Australia had a poor start to their campaign in the last edition of the Champions Trophy in 2013 when they had lost to England in their first match before crashing out in the group stages. Smith is keen to avoid a repeat this time round and reiterated the importance of focusing on the job at hand and not giving too much thought to the off-field issues.

“We are focusing on this tournament. These are the big tournaments and the ones you really want to win,” he said. “So my focus is on that and I’ll let the CA handle everything else. Every game is crucial and we have got to be at our best from ball one,” he added. Smith also hinted at pace being his primary weapon in Australia’s opening match against New Zealand which comes as no surprise considering the quality of resources at his disposal. ICC Champions Trophy 2017: Australia contemplate unleashing four-pronged pace attack vs New Zealand

Although Smith stated that the playing XI would not be settled until the final training session, there is a chance that the four pronged pace battery of Australia comprising Mitchell Starc, Pat Cummins, James Pattinson and Josh Hazlewood could be seen in action together for the first time. The only selection dilemma in an otherwise settled batting line up is who amongst Glenn Maxwell and Chris Lynn will get the nod to fulfil the finisher’s role.

“If it is good batting and the sun is out hopefully we can put a bit of pressure on those guys and try and play the way we did in Australia,” Smith said. Although Australia have won nine out of their last 10 encounters against their trans Tasmanian rivals, Smith feels that it will be naive to take the Black Caps lightly considering the resurgence in the fortunes of the team in the past three to four years. ICC champions Trophy 2017: Points Table

The Australian players will be playing One-Day Internationals (ODI) after a significant gap, having played four Test matches in India before taking part in the Indian Premier League (IPL). Smith asserted that his teammates will have to adjust fast to the demands of the 50-over version of the game as well as to the conditions in England as they try to win the Champions Trophy for a record third time.

“It takes a little bit of time. You just have to realise 50 overs are a lot more than 20 and you can reign things back,” he said of the adjustment to ODI cricket. “It has taken a few guys a little bit of time just to bring their games back down a level and not try and overhit the ball, particularly here in England where the outfield is so fast.” 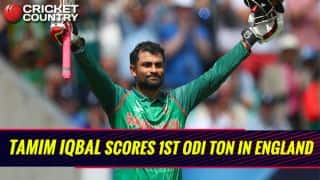