Steve Smith insists Australia's batsmen will be ready for their do or die Champions Trophy showdown with England despite their lack of action in the tournament.

Steve Smith insists Australia‘s batsmen will be ready for their do or die Champions Trophy showdown with England despite their lack of action in the tournament. Smith’s side endured the frustration of having Monday’s clash with Bangladesh abandoned due to rain, just days after their opening fixture against New Zealand was also washed out. On both occasions, it has been Australia who were batting in the early stages of their innings when bad weather ended play. Against Bangladesh, they had reached 83-1 in pursuit of 183 to win and required only four more overs to be bowled to ensure they would take maximum points via the Duckworth- Lewis rule used in rain-affected matches.

With two points from their two matches, Australia will have to beat hosts England in Birmingham on June 10 to reach the semi-finals. “I think it makes the equation pretty simple for us,” Smith said. “We have to beat England and then I think we’re through.

“I haven’t really read into anything else that’s happened. I guess we’ve just got to beat England.” In the circumstances, Australia could have done with their batsmen being in good form before the crunch encounter with their old rivals.

But, asked if their lack of time at the crease could undermine them against England, Australia captain Smith said: “I’m sure they will be okay. “You know, most of the guys have been playing a lot of cricket, anyway, having been at the IPL and things like that.

“I think once they get out in the middle, things will just click into place, and yeah, hopefully we can play well in Birmingham.” On the bright side for Smith, his bowlers were more effective against Bangladesh after struggling to find their rhythm in the New Zealand match.

Pace bowler Mitchell Starc was the cream of the crop with four wickets in nine balls in rout the Bangladesh tail. “I thought all our bowlers were a lot better today. We hit some good areas early on and challenged the defence of Bangladeshi batsmen,” Smith said. “Everyone that bowled I thought did a pretty good job today, and it was nice that we were able to turn things around from the way things went in the first game against New Zealand.”

Starc’s blistering spell was some consolation for Smith, but he was still left to rue the weather and what he felt was the umpires’ quick decision to go off, thus denying Australia a chance for those vital four overs.

“Of course I didn’t want to go off. I was happy to keep batting through the rain,” he said. But the umpires are there to make a decision and I think drinks was at the end of that over, which probably didn’t help.

“If the game had just carried on, perhaps they may have had a different opinion. It’s disappointing not to get a win but can’t do much about the weather and we can’t control that.”

Beaten by England in their opening match, Bangladesh are without a win and look likely to be eliminated in their last game against New Zealand. Bangladesh captain Mashrafe Mortaza remains hopeful of a miracle.

“You never know. I think even in 2015 World Cup, we got one point from Australia and went through. It really helped us,” he said. 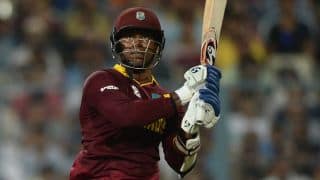