The ICC Champions Trophy 2017 will begin on June 1 in England itself.

After a fine 12-month period as captain of the England One-Day International (ODI) team, Eoin Morgan now has a plan of action to approach the ICC Champions Trophy 2017 which is scheduled to take place in England itself. Morgan now feels he can do an analysis of the batting, bowling and fielding departments of his side and work on them. The 29-year old who is currently leading his side against Sri Lanka in the 5-match ODI series, the first of which was a tie, also talked about the strengths and weaknesses of his team. Apart from that Morgan also discussed what impressed him the most and what are the areas his team will have to work on in the times to come. READ: England and Sri Lanka play a thrilling tie in 1st ODI at Nottingham

England’s top-order with the likes of Alex Hales, Joe Root, Jason Roy and not to forget Jos Buttler has shown tremendous talent and skill over the last few months in the limited overs format. When asked about what he thinks about the batting line-up, Morgan said – “With the side at the moment, our batting has come a really, really long way in 12 months and it has really driven our confidence up. We’ve grown into a side where we feel comfortable batting first and can bat a side out of a game or feel comfortable chasing. That confidence rubs off on our fielding, our bowling and it’s where we’re at at the moment,” as quoted by skysports.com. ALSO READ: Eoin Morgan: Test cricket not my priority as of now

He further added – “With the performances Jos Buttler has put in, he’s been elevated when it’s felt right. There has also been Joe Root’s success – he’s been the glue for us, probably in all forms of cricket. It’s great having that weight of runs behind you and being allowed to push Jos up the order has been very successful for us too.”

England’s bowling department has seen an influx of new pace bowlers over the last year. Chris Woakes, David Willey, Liam Plunkett have together formed the crux of the bowling attack for England. When asked about the bowling department and how it is shaping up, Morgan said – ” We’re always looking for new ideas. With the success we’ve had in the last 12 months, the couple of series that we have won, alongside that is looking back at how everyone has performed and how unique every individual is. I think that is the same with our bowling unit, having the right balance in our attack and encouraging everybody to actually stick with what their strengths are.” ALSO READ: Eoin Morgan credits Chris Woakes, Jos Butler, Liam Plunkett for England’s effort vs Sri Lanka in 1st ODI

He added – “There are a few ways of getting a batsman out. When you get the stage of the innings where a batsman is teeing off or coming quite hard at you, there’s always a stage where you have to back your strength ahead of his. When it comes head-to-head, you need to stand at the end of your mark and know that you are going to execute what you are trying to do in order to take a wicket.”

Morgan stressed on the importance of variation in the bowling attack as well. He said – “One of the main things we learned from the 50-over World Cup was that we need variation in our side. So that potentially means a left-arm seam bowler, a genuine quick who bowls 90mph and then your steady, reliable guy who hits a length and bowls a bit at the death.”

He further added – “It’s important to keep trying to evolve your squad, I think if we went down the route of picking players because we thought they were good but they were all the same, I don’t think that’s the right answer. I think it’s important to have variation throughout. In a 50-over game it’s difficult to take wickets in the middle period so you need that variation and those options in order to create different angles and force a mistake from the batsman.”

Morgan’s ODI side consists of players who are young and athletic, and can dive around to save runs for their team. When asked about the team’s fielding potential, Morgan said – “We have a very talented fielding unit, all the guys are selected not just because their good at batting or bowling – they’re athletes. Some of them are very, very fit men. There are no excuses as to where we’re at, the only thing I can point at is lack of experience.”

He added – “In those big pressure moments you need to recognise that it’s a big part of the game and that is when good sides step up and take catches or hit the stumps or produce that match-winning Yorker. We’re looking for guys to do that. We can be a bit more patient with our fielding because we have all the attributes to do that, it’s just a matter of keeping a cool head.” 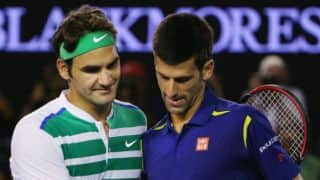