ICC Champions Trophy 2017 Final: Pakistan have nothing to lose, the pressure is more on India, says Azhar

Pakistan are ready to change the course of history in a clash that's "bigger than the Ashes" when they face arch-rivals India in the Champions Trophy final.

London: Pakistan are ready to change the course of history in a clash that’s “bigger than the Ashes” when they face arch-rivals India in the Champions Trophy final. Some estimates suggest Sunday’s match between the sub-continental cricket giants at the Oval in south London could attract a worldwide television audience of more than a billion viewers. Title-holders India will be firm favourites against a Pakistan side who were the lowest ranked of all the teams taking part in a tournament featuring the world’s top-eight one-day international sides. It was only on June 4 that India launched their title defence with a 124-run rout of Pakistan at Edgbaston. FULL CRICKET SCORECARD: India vs Pakistan, ICC Champions Trophy 2017 Final at The Oval

Yet even by their own “unpredictable” standards, Pakistan’s transformation since that reverse has been remarkable and on Wednesday they knocked previously unbeaten tournament hosts England out of the competition with a comprehensive eight-wicket win in Cardiff. Pakistan have yet to play a match at the Oval this tournament but in bowling coach Azhar Mahmood, who spent several seasons at his “second home” playing for Surrey, they have someone familiar with all the vagaries of the London ground. And the former Pakistan all-rounder insisted all the burden of expectation was now on India’s shoulders. CT 2017 Final: It is time for PAK to beat IND, asserts Abbas

“We’ve got nothing to lose the pressure is more on them,” Azhar told reporters at the Oval on Friday. “They are ranked higher than us – so everyone is talking about India, India. But I can tell you one thing we have come to win.” India have won all three of their previous matches with Pakistan in the knockout stages of International Cricket Council tournaments to date but Azhar, 42, said there was no reason why the sequence had to be extended this weekend as well. “India have the upper hand in ICC tournaments,” he admitted before adding: “But things can change, and this is the time for us to change the tag that we don’t perform well at ICC events. “History can change, and I hope we can [change it].” ICC CT 2017, India vs Pakistan Final: Mohammad Aamer likely to play

Meanwhile Azhar said there was no hiding from the scale of a fixture which, mainly because of political pressure, rarely takes place outside of a major international tournament. “It is massive,” said Azhar. “India refuse to play against us [in Pakistan’s adopted home of the United Arab Emirates]. But [now] on the biggest stage it is India v Pakistan. It is like the Ashes … it is bigger than the Ashes and expectation is high from both nations, crazy about cricket. The pressure is high for both sides and their countries … it is a dream final for the sponsors and the broadcasters,” he added.

“This is the game they want, but it is up to us how we handle the pressure on the day.” And he insisted a Pakistan victory would be no great surprise. “It wouldn’t be a shock if we won. No one gave us a hope when we got here. We were the number eight ranked side, and no one gave us any credit. But someone asked me before the tournament who would be in the final and I said Pakistan,” Azhar insisted. “I believe in my boys … if we win it would be a great gift to the whole nation.” 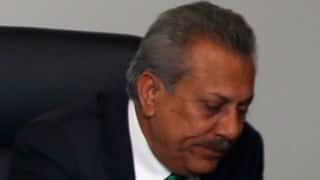