On the eve of the ICC Champions Trophy final against Pakistan at The Oval on Sunday, India skipper Virat Kohli hinted at playing the same combination.

London: On the eve of the ICC Champions Trophy final against arch-rivals Pakistan at The Oval on Sunday, India skipper Virat Kohli hinted at playing the same combination in their quest for defending the title. Despite all-rounder Hardik Pandya getting belted by the Bangladesh duo of Tamim Iqbal and Mushfiqur Rahim in the second semi-final in Birmingham, Kohli backed the youngster’s inclusion, terming him as a “complete package”. “Not looking to change too many things because I would anyday back a guy like Hardik, who provides you so much balance in conditions like England. He can be effective as a bowler and his batting is priceless,” the 28-year-old told reporters. FULL CRICKET SCORECARD: India vs Pakistan, ICC Champions Trophy 2017 Final at The Oval

“If you are chasing a total where you need eight runs an over and you have lost wickets, he is the guy who can still win you the game. That’s the kind of belief he has in his abilities and we have in him. He is a complete package, so I would not like to change anything at this particular stage,” he replied when asked about any possible changes in the playing XI. Probed whether the advantage of thrashing Pakistan by 124 runs in the tournament opener will be on their minds when they take the field on Sunday, Kohli replied in the negative.

“There is no guarantee that a team will always win or lose against any particular opposition. It all depends on how you perform and give your 100 percent on that day. We focus on the things within our control, so as I said we don’t go after past records and statistics. I don’t see any relevance of the first game here. You can never tell how a particular team starts a tournament. Some teams start off confidently but they fail later while some might not have the best starts but they come back amazingly which Pakistan has done,” he said. De Villiers: Kohli’s talent is underpinned by willingness to work hard

“Everyone is aware of the kind of talent Pakistan have in their team. On their day they can beat any side in the world. We are quite aware of that but at the same time neither are we too intimidated nor are we too arrogant to what we are doing. It’s importance to maintain the balance of being confident on your own skill and what you are doing as a team,” he added.

Kohli expected the match to be a good contest where all the 22 players will give their all to take their team through. “It’s going to be a very well-contested match. Both teams want to win the final. I’m sure all the players will come out and give their 120 percent,” he said. Kohli also gave an insight of how he prepares for a big match but pointed out that no player can dominate or fail against any rival everyday. CT 2017 Final: Bars offer discount ahead of IND vs PAK clash

“I have never believed in watching too many videos of anyone. I prepare in the best way I can. I believe in my abilities and if I feel I am technically good enough I should be able to counter any bowler. I don’t take any extra pressure. Whether you have played people or you haven’t, you cannot guarantee your performance. Even the bowlers whom you play regularly in a series, in two matches you can be on top of him and in the third he can nick you off. So its basically how to react to every ball that’s bowled to you,” he said. India will go into the final with a 14-2 winning record against the Green Brigade in all major International Cricket Council (ICC) tournaments. 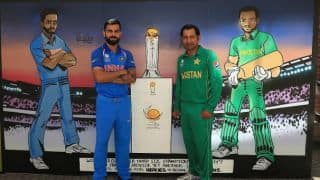