England will host the next edition of the ICC Champions Trophy, which will begin from June 1, 2017.

The Champions Trophy 2017 is set to begin from June 1, 2017, with the first match between Bangladesh and hosts England at The Oval. All the captains including MS Dhoni, Steven Smith, AB de Villiers, Kane Williamson and others have extended their support to this tournament. The schedule was announced earlier on Wednesday by the ICC. Defending champions India will take on arch-rivals Pakistan in their opening encounter on June 4 at Edgbaston. India won the 2013 edition of the tournament defeating hosts England in a rain-truncated final. Dhoni led Indian to their second World Cup title two years prior to winning the Champions Trophy. READ: ICC announces groups for ICC Champions Trophy 2017

Speaking about the tournament Dhoni said,” “We know how intense this event can be and we are under no illusion that it will be any different next year”. South Africa skipper de Villiers, who lit up the recently-concluded Indian Premier League (IPL) 2016 with some breathtaking innings said, “We are going to have to play at our optimum best to have a chance of lifting that elusive trophy,” according to the official ICC website. READ: Champions Trophy 2017: India’s 1st match against Pak

Smith and Sri Lanka captain Angelo Mathews also expressed what it means for them and their teams to win the tournament. “It’s a truly global tournament that is highly regarded amongst all cricketers and one in which Australia has had success in the past,” said Smith.

Mathews, who is currently in England, leading Sri Lanka in a Test series against the hosts said, “The short and sharp ICC Champions Trophy will test the players to their  absolute limits”.

Hosts England will be led by Eoin Morgan. Morgan was handed over the limited-overs captaincy just ahead of the ICC World Cup 2015. He said,” “As professionals, we want to be involved in such intense competitions where our individual and team skills are tested almost each day”

Bangladesh for the very first time will play in the Champions Trophy. Their captain Mashrafe Mortaza says that his side belong among these elite group of teams. “I firmly believe we belong to the elite group of teams and hopefully through our performances we will be able to justify our place”

Pakistan will want to put their poor run in the limited-overs fixtures behind them and build some momentum going into the tournament. “We will aim to put up winning performances so that we can improve our team ranking and qualify automatically for the ICC Cricket World Cup 2019,” said Azhar Ali. 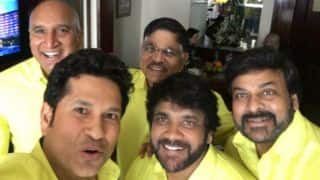