ICC Champions Trophy 2017: Pakistan face England at Cardiff in the first semi-final of the ongoing championship.

The last match of group stage in ICC Champions Trophy 2o17 between Pakistan and Sri Lanka was all to play for both teams. It was a must-win encounter with a semi-final berth at stake. Eventually, Pakistan prevailed in a cliffhanger by 3 wickets. In pursuit of 237, Pakistan were cruising only to falter in the mid-innings. They were led by a brilliant fightback posed by Mohammad Aamer and skipper Sarfraz Ahmed, as Pakistan move to the next round of the tournament. Sri Lanka, however, were let down by a middle-order collapse and ordinary fielding. From Group B, India and Pakistan progress to the top 4 and will play Bangladesh and England respectively. FULL CRICKET SCORECARD: Sri Lanka vs Pakistan, ICC Champions Trophy 2017, Match 12

Pakistan openers did not allow the Sri Lankan bowlers to settle. The pair of Azhar Ali and Fakhar Zaman started off on a blazing note. Zaman, playing his second match, continued from where he had left against South Africa. He was in a punishable mood against the veteran Lasith Malinga. Zaman waited for the slower ones, came hard against the deliveries offering width, and gave his all to belittle Malinga. Gaining confidence, he ensured the bad balls were sent to the ropes against Suranga Lakmal and Nuwan Pradeep as well.

Azhar, generally playing the waiting game, joined the party in the 8th over. He welcomed Thisara Perera by advancing down the track and smacked the ball to River Taff. Zaman followed suit and sent another one to the river in the very next over. This time the bowler facing the onslaught was Pradeep. The duo added a 50-run stand in 52 balls, whereas the left-hander slammed his maiden fifty in the 11th over. Nonetheless, Pradeep got rid of Zaman as he failed to connect a hook shot and was caught at fine leg.

The Pakistani flags outnumbered the Sri Lankan Papare in the stands with the former well placed at 90 for 1 in 15 overs. However, Babar Azam’s dismissal changed the complexion of the game. His was a soft dismissal, trying to clip one towards leg-side only to be picked at mid-wicket. The pair of Mohammad Hafeez and Azhar never got going and led to another soft dismissal of the senior pro. Pradeep got his second scalp and the Islanders were back in the hunt.

Just when a small partnership was brewing between Azhar and Shoaib Malik, Angelo Mathews resorted to Lakmal and the move paid dividends instantly. Extra pace did the trick for Azhar who tried to glide one towards third man and gave a catch in the slip cordon. Pakistan started their infamous self-destruction with Malik falling prey to a short ball for 11. He was set up by Malinga with a few yorkers followed by a short delivery. There was total chaos with risky singles as the innings started to fall apart.

Imad Wasim came in at No. 7 to resurrect the innings with Sarfraz. While Sarfraz played in his usual crafty manner, Imad poked one outside off to give a regulation catch to the wicketkeeper. He departed for 4 as Pradeep struck for the third occasion. Debutant Fahim Ashraf came in, faced a barrage of short deliveries, got a start, but departed failing to cover his ground at the non-strikers’ end. It was a lazy effort from the newcomer as he departed for 15.

The chase needed stability and was provided by Aamer and Sarfraz. The pair looked in no hurry and displayed proper cricketing shot. There was no aerial stroke and poor fielding helped their cause as well. Malinga’s final overs triggered two chances only to give vital reprieves to the opposition captain. While Perera dropped a sitter at mid-on, Seekkuge Prasanna messed a difficult chance. Amidst the hullabaloo, Sarfraz was solid in his defence and played some cracking shots to reach a vital half-century.

Aamer was equally sensible as well. He played with a straight bat, exhibited patience, and was eager to see his side home. Sloppy fielding hurt the Sri Lankans and the writing was on the wall since then. The stubborn and unbeaten 75-run stand between the pair rescued the Men in Green from a precarious position and snatched victory from the jaws of defeat. It was a slow short ball by Malinga as Sarfraz waited and guided it to third-man for a boundary to set up a riveting Pakistan-England semi-final at Cardiff on Wednesday.

Earlier, Pakistan opted to bowl. Amidst a disciplined bowling effort, Sri Lankan openers looked in good touch. Nonetheless, Danuskha Gunathileke was dismissed for 13 to give Pakistan their first breakthrough. Kusal Mendis and Niroshan Dickwella started the repair work with a fifty-run stand to take the innings forward. A peach of a delivery from Hasan Ali rattled Mendis’ stumps for 27. Mathews and Dickwella played out the middle overs with purpose and kept Sri Lanka ahead. However, after Mathews’ fall, it was a one-way traffic for the fielding side. They were brought back in the game with a brilliant bowling display by Aamer and Junaid Khan. The pair pitched the ball in the right channel and bowled with threatening pace. From 161 for 3, they were reduced to 167 for 7. Nonetheless, Asela Gunaratne’s presence ensured Sri Lanka stretched the innings till the last over and posted 236.

In the end, Sri Lanka fell short by 30 to 40 runs and erratic fielding. They remain defeated against Pakistan on England soil and will head back home. 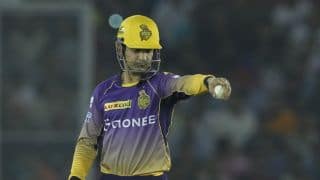 Gautam Gambhir keen on taking up mentor’s role in TNPL 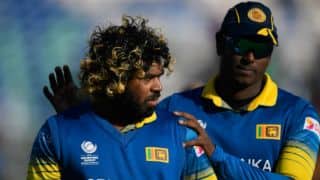