ICC Champions Trophy Final 2017: 'No one recognised Pakistan, and here we are, the champions,' says Sarfra

Less than two years back Pakistan had barely managed to cling on to a ICC Champions Trophy 2017 spot eclipsing West Indies. They entered the tournament ranked eighth in ODIs, the lowest amongst all participating sides.

“Actually not,” admitted Pakistan skipper Sarfraz Ahmed. “After the India match, I said to the boys that the tournament doesn’t finish here. We played very well and now we have won the final.”

Pakistani opener Fakhar Zaman slammed his maiden century (his third consecutive fifty-plus score) in his fourth ODI. Zaman’s 106-ball 114 set the tone for Pakistan’s 338 today. Praising the 27-year-old, Sarfraz added: “He [Zaman] is a great impact. In his first ICC event, he played like a champion batsman. If he plays like this, he will make his country proud.” FULL BLOG UPDATES

Hasan Ali’s 13 wickets helped him bag the Man of the Tournament award and the victory in the grand finale was set up by Mohammad Aamer’s 3-for at the start.

Sarfraz hailed his entire bowling unit: “All credit goes to my bowlers. Aamer today. Hasan Ali throughout the tournament. Imad Wasim. Shadab Khan. All bowlers. This is a young team. Credit to the team management for boosting us well.”

Sarfraz signed off in an emotional note.”When we arrived here, we played like we had nothing to lose. My advice is to play like this. No one recognized Pakistan in world cricket, and here we are, the champions. It’s a very proud moment for me and my country, and thanks to the nation for supporting us Keep praying for us, Pakistan.” 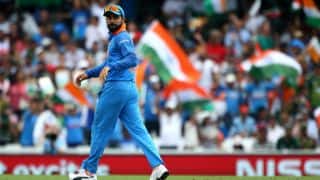