Donald hoped the current side under AB de Villiers would lift the trophy at long last.

Melbourne: South Africa bowling coach Allan Donald says his team’s biggest challenge in Sunday’s ICC World Cup 2015 blockbuster against India will be to adjust to the intimidating aura of the Melbourne Cricket Ground.

More than 80,000 people, mostly India supporters, are expected to pack the iconic stadium for the key Pool B match which will almost certainly assure the winner of a place in the quarter-finals.Donald, a former fast bowler nicknamed ‘White Lightning’, hoped his players would relish the occasion of playing in one of the world’s most famous cricket stadiums. ICC Cricket World Cup 2015: POINTS TABLE

“You just have to walk out there, even when these stands are empty. It’s an intimidating place,” the 48-year-old was quoted as saying by the Australian Associated Press on Friday.

“It’s a home game for India. There could be almost 100,000 people here and there is going to be a lot of Indian support, so keeping the crowd quiet is going to be a big thing,” Donald added.

“It’s a massive game. South Africa v India, MCG … this is why we play for our country.”

Donald, who appeared in four World Cups from 1992 to 2003 without winning the title, hoped the current side under AB de Villiers would lift the trophy at long last.ICC Cricket World Cup 2015: SCHEDULE & MATCH DETAILS

“To not be able to walk away with a medal is a bit of a sour one, but I’ve got no regrets,” said Donald, whose famous mix-up between the wickets with Lance Klusener in the last over of the 1999 semi-final against Australia ended South Africa’s hopes of playing in the final.

“Hopefully, this time around there is something waiting, but we are very patient about that process,” he added.

“It’s just an awesome time to be around this team. I’m very privileged. I love World Cups. They’re such amazing events.”

Donald took 330 Test and 272 one-day wickets during a 12-year international career which ended after a 2003 World Cup where South Africa were the main hosts.ICC Cricket World Cup 2015: Complete Coverage 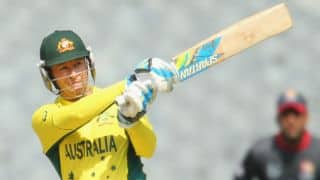 Mashrafe Mortaza: We prefer playing Australia rather than looking for a point form abandoned game