With a fifth straight defeat, Afghanistan have been eliminated from the the World Cup.

MANCHESTER: A day before England’s game against Afghanistan, Eoin Morgan had not ruled out the possibility of a surprise. But on match day, the England captain ensured no such thing happened. England posted the highest total of the World Cup 2019 and led by Morgan’s career-best effort, inflicted a 150-run defeat on Afghanistan, ending their hopes of a semi-final berth.

Morgan pummelled a total of 17 sixes, the most by a batsman in an innings, overtaking Rohit Sharma, AB de Villiers and Chris Gayle. The result: a career-best 148 with England registering a monster 397/6, their highest ever in World Cup. Morgan, who walked off the field against West Indies and remained in doubt for Tuesday’s encounter, dispelled all questions surrounding his fitness with a thrilling century, his quickest in ODIs and the fourth-fastest in World Cups. ALSO READ: England vs Afghanistan, Live Blog

Chasing 398, Afghanistan chalked out a courageous reply. Perhaps Afghanistan knew the target was beyond their reach. So instead of going for the target, Rahmat Shah and Hashmatullah Shahidi opted to build a strong, stellar ODI inning. Had this been the first innings, the expectations of England steamrolling them wouldn’t have been a common consensus. Then again, 398 was just too big a target for them to achieve against an attack like England’s. Although Afghanistan fought tooth and nail through Shahidi, they eventually fell short.

Morgan was aided by Jonny Bairstow’s 98, who laid the platform for his skipper’s carnage. But as wonderful as that knock was, Morgan’s remorseless hitting overshowed it, to an extent that Joe Root, who scored a solid 88 off 82, and partnered Morgan in a stand of 189, almost remained unnoticed. Afghanistan had a century too, with Rashid Khan, their best bowler, conceding 108 in nine overs.

Fighting for early advantage in a cat and mouse battle, Mujeeb Ur Rahman opened the bowling for Afghanistan and kept England quiet initially. In that while, Dawlat Zadran bowled short, and James Vince, Jason Roy’s replacement, cracked a couple of delightful boundaries before top edging a bouncer to short fine leg.

England were sedate in their approach to reach 46 in the first ten overs. Afghanistan’s fears of not building on Vince’s wicket came true with Bairstow and Root forging a partnership – one which began to look scary one the spinners came on.

In a two-over spell, Rashid was belted for a six and a four by Bairstow. Mohammad Nabi was dispatched over cow corner and the part-time of Rahmat Shah was drilled down the ground for six. A thunderous cover drive brought up Bairstow’s fifty off 61 balls. And his 100-partnership with Root was raised off just 98 deliveries.

Bairstow was beginning to look dangerous and just 10 shy of his century when Afghanistan skipper Gulbadin Naib brought himself on. He took a sharp return catch to bring out his trademark Popeye celebration and end the threatening-looking partnership. But poor fielding once let Afghanistan down. By the 25th over, there were at least 10 misfields, including Nabi losing the ball in the sun and not converting the half-chance.

Morgan came in and straightaway showed he was match fit by swatting four sixes within his 30 balls. He skied a drifted off Rashid but Dawlat grassed the simplest of catches of Morgan and from there, the floodgates opened. Sixes is what Morgan dealt in. With his fifth, Morgan reached his fifty. The seventh came curling towards the media centre and the eighth pulled over midwicket the next ball. The next three sixes were hit in a span of five balls, getting Morgan to a 57-ball century. It took England just 14 balls to race to 300 from 250 and 21 for Morgan to go from 50 to 100.

It did not stop there. For the second time, Morgan took Rashid for three sixes in an over, before taking on Dawlat for 17 in the 46th. His counterpart Naib was clubbed for two more before Morgan finally perished in the deep. With his departure, the chances of England getting to 400 dimmed. Dawlat bagged a consolation price with wickets – of Jos Buttler and Ben Stokes – before Moeen Ali‘s nine-ball 31 left England three shy of 400.

Afghanistan’s chase began on a wrong foot. Noor Ali Zadran faced six balls before playing on to Jofra Archer before Rahmat and Gulbadin steadied with a 48-run stand. The skipper tried to get a move on with a few strokeful boundaries, but top-edged a pull off Mark Wood for Buttler to take a fine catch running behind.

Shah and Shahidi put on 52 runs for the third wicket, which was finally representative of a structured Afghanistan approach. Rahmat fell four short of a half-century, but with Asghar Afghan, Rahmat forged yet another entertaining partnership. Both targetted Adil Rashid, combining to smack the legspinner for three sixes. With seven wickets in hand, both swung for the fences and brought up a run-a-ball 50 partnership. Shahidi copped a blow to his helmet but recovered to continue playing his array of shots.

Bairstow, who had dropped Rahmat for 6, also put down Afghan on 28. But Rashid ensured it wasn’t a lucky brave and had Afghan out caught behind. Nabi thwacked a six before holing out in the deep and from there, not much was left to offer. Archer cleaned up Shahidi to end his gritty innings and Wood knocked over the tail to send Afghanistan crashing out. 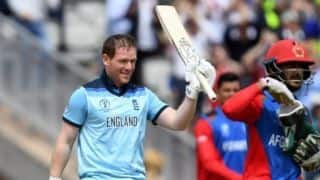