Rohit was disappointed to have given his wicket away on 103 against Sri Lanka on Saturday.

HEADINGLEY: For someone who has three ODI double centuries and six scores of 150 and above in the format, not scoring a daddy hundred has left Rohit Sharma disappointed. Despite entering the record books as the man with the maximum centuries in a single edition of a World Cup, Rohit rued the fact that in the last three innings, he could not go on and get a big score. ALSO READ: Five-star Rohit, centurion Rahul leads India’s demolition of Sri Lanka

Rohit’s match-winning hundred against Sri Lanka on Saturday was his third consecutive century. Against England and Bangladesh, he had scored 102 and 104, getting out immediately after going past the 100-run mark. His earlier two centuries of the tournament 140 against Pakistan and 122 vs South Africa had shades of a marathon knocks but neither was the kind of hundreds which Rohit, over the years has come to be known of.

On Saturday, against Sri Lanka, Rohit again, as soon as he crossed his 27th ODI ton, he chipped a Kasun Rajitha ball to Angelo Mathews for 103. As he walked back to the change room, Virat Kohli greeted him on his way out to the ground but even then, Rohit was disappointed to have given his wicket away. It was after the match had ended and Rohit was addressing the media that he admitted to have rued the opportunity to not going even further.

“But I would take that hundred. And the only reason I say that is because eventually we won the game, except one against England which I think we came pretty close as well. We lost by 25 runs, I think. But, yes, my aim and goal is always to bat as deep as I can, because after a hundred, it’s your mistake that can cost you your wicket. That is what I have felt always. And, yeah, little disappointed with that, but I’ll make sure if, come the semis, if I’m in that situation I wouldn’t just let it go like that.”

With India finishing at the top of the points-table at the completion of the league stage, it is conformed that they will be taking on New Zealand at Old Trafford in Manchester for the first of the two semi-final. As usual, all eyes will be on Rohit to continue his fine form. While for any cricketer, expectations are supposed to increase pressure, Rohit described how he manages to stay away from it.

“You’re in that fraternity where you meet so many people. They will talk about how well you’re batting, how many runs you’re getting, how many hundreds you’ve scored. But to just keep away from all that is very important. And I’m trying to do that. Fortunate that we have a bunch of guys around us who do not discuss these kind of things too much, about personal milestones. And my family is here to distract me from that,” Rohit said.

Besides Rohit’s record five centuries, the other big takeaway for India was the way they approached the chase and finished it. After their first league match against South Africa, this was India’s second win batting second, having lost to England last Sunday. Against Sri Lanka, India chased down 264 with more than six overs remaining.

“I think it was important because we want to cover all our bases, tick all the boxes before the semis come. Basically it’s a knockout for us, so we wouldn’t be able to afford mistakes on that particular day, a lot of mistakes,” Rohit highlighted.

“So ticking boxes was very, very important. I think we batted well when we were put in. We scored a good amount of runs. Yes, after that South Africa game, this was a second chase we were in. So we wanted to make sure that we do it nice and clean. And, yes, so before the semifinal comes, we wanted to make sure that the boxes are ticked and we’re good to go for the semis.” 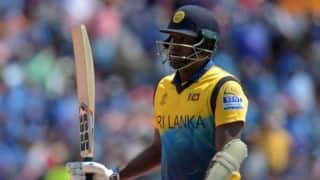