Allrounder Jeevan Mendis is not too worried about Sri Lanka's crushing defeat in their World Cup opener against New Zealand on Saturday.

Allrounder Jeevan Mendis is not too worried about Sri Lanka‘s crushing defeat in their World Cup opener and said with eight more games still to play, his team “can get the five wins” required to make the semi-finals.

Sri Lanka were completely out of sorts in their first match of the mega-event against New Zealand on Saturday, losing by 10 wickets, but Mendis is optimistic of the islanders bouncing back.

“We have to say the first two games are very crucial to give all the players and the team a boost. We hope we can pull something out of the bag in the next games,” Mendis was quoted as saying by ICC media.

“The format is good. For all the teams to play each other is great and it gives us lots of chances to get the five wins you need to get to the semi-finals,” he added.

The 36-year-old said they would need to put up at least 270-280 runs on the board in the upcoming games.

“As a batting group, we need to at least put scores of 270, 280 on the board. Hopefully the wickets dry up and our pace and spin variation come into play. It’s all about our confidence and a few batsmen can get in and play an anchor role, we’ll be able to bat around them and play well,” Mendis, who has returned to the fold four years after his one-day debut, said.

Sri Lanka will play their next match on June 4 against Afghanistan, the only World Cup contender ranked lower than them in the ICC rankings. Mendis emphasised on keeping wickets in hand early on. “We always talk about not throwing too many wickets away in the first powerplay, but it didn’t happen (against New Zealand on Saturday),” he said.

“We need to adapt to score runs at all stages of the innings. We have power hitters who can come in at the latter stage and make quick runs so hopefully the top five can put us on a good platform,” said Mendis.

New Zealand batsman Colin Munro said that the Kiwis are not looking too far ahead after their comfortable opening game victory and would try to win as many matches as possible in the league stage.

“It was pretty much a perfect performance! But we can’t get too far ahead of ourselves. We have still got eight games to go and have got to win as many of them as we can.

“But we will take this one, we have played really well. We know if we can get off to a good start then that bodes well,” said Munro, who scored an unbeaten 58 against Sri Lanka.

The 32-year-old admitted that the Black Caps were impressive on the field.

“It started with the toss, it was a good one to win, and then we bowled well from the start, we put the ball in the right areas. And we fielded well, we took some good catches. I think the way we fielded was probably the most pleasing thing as a group,” Munro said.

“Sometimes you can just coast through in those games when you are getting wickets throughout. But we stayed positive, we stayed hungry. I thought par score was probably 240 or 250, but I don’t think we would have had to go too hard to get there.” 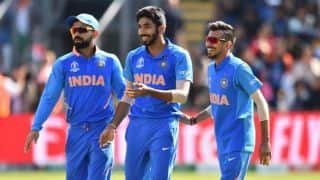