Namibia and Hong Kong remain on course to fulfill their Test cricket ambitions as emerging nations will compete against each other in the ICC Intercontinental Cup.

Dubai: Namibia and Hong Kong remain on course to fulfill their Test cricket ambitions as emerging nations will compete against each other in the ICC Intercontinental Cup 2015-17, beginning on 10 May. Namibia will play hosts to Hong Kong in the opening round action of the four-day First-Class competition at the Wanderers on Sunday.

The side that wins the round-robin league tournament will play the bottom-ranked Test team on the Reliance ICC Test Team Rankings in the ICC Test Challenge in 2018. Ireland will defend the title of the tournament, which also features former winner Afghanistan, Netherlands, Papua New Guinea (PNG), 2004 champion Scotland and the United Arab Emirates (UAE).

Namibia participated in ICC Cricket World Cup 2003, but lost all six of its matches. In 2009 Namibia uniquely won the ICC Intercontinental Shield for the four teams placing seventh through 10th in the ICC Cricket World Cup Qualifier 2009. Since the 2006-07 season, Namibia has participated in the second tier of South African first-class and list A cricket. Associate nations could get Test status: ICC

Led by Nicolaas Scholtz, the squad also includes veteran all-rounder Gerrie Snyman who has scored two double-centuries in the competition – both against Kenya – and his innings of 230 in the 2008 match at Sharjah came out of an all-out total of 282. Looking ahead to the start of the ICC Intercontinental Cup 2015-17 competition, Scholtz said that Namibia are looking forward to hosting Hong Kong and to play good competitive cricket. He said that it is the first time they will be playing in Namibia, adding that he truly believes they will enjoy their warm Namibian hospitality. They are well prepared and the guys have been putting in the hours and it’s truly appreciated and will look to reap the fruits of this dedication. Best of luck to everyone, he added. Ireland should be granted Test status, feels Michael Holding

Meanwhile, Hong Kong will be led by former Warwickshire wicketkeeper Jamie Atkinson and has in its ranks a host of players, including promising 16-year-old all-rounder Waqas Khan, who have represented their sides at the Under-19 and senior levels. Atkinson said that the Intercontinental Cup gives Hong Kong a chance to play first-class cricket on a regular basis. It provides a pathway for the best team in the competition to eventually try to play against a Test playing nation at the end of the cycle.

The squad is raring to go after a pre-tour in South Africa. Everyone has been working hard at training and in matches to best prepare for the upcoming game against Namibia. They will be aiming to make a good start to the both the ICC Intercontinental Cup as well as the one-day ICC World Cricket League Championship, with every result important to final standings, he added. Giving Intercontinental Cup teams Test status is hurried 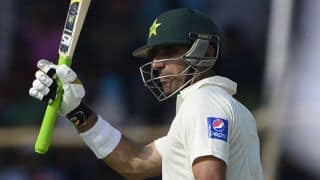