Jacques Kallis stole the show with four wickets as a pace inspired South Africa restricted minnows Zimbabwe to a paltry 93 for eight in a Group C encounter of the ICC World Twenty20 at Hambantota on Thursday. 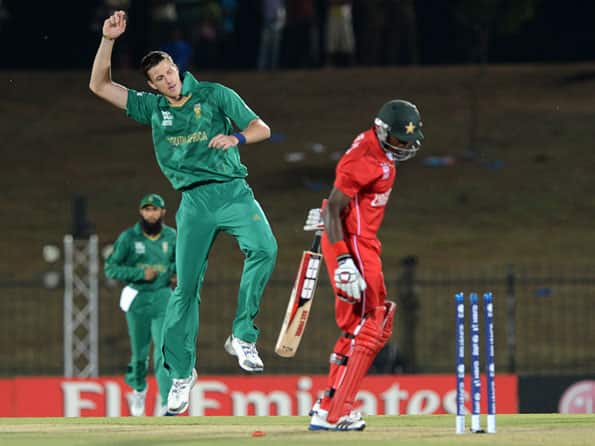 Jacques Kallis stole the show with four wickets as a pace inspired South Africa restricted minnows Zimbabwe to a paltry 93 for eight in a Group C encounter of the ICC World Twenty20 at Hambantota on Thursday.

Kallis utlised the lively pitch at the Mahinda Rajapaksa Stadium to perfection and scalped four wickets for 15 runs to rock the Zimbabwe innings.

He was ably supported by pace duo of Morne Morkel (2/16) and Dale Steyn (1/9), who produced a lethal opening spell to dismantle the Zimbabweans.

Zimbabwe’s struggle can be ascertained from the fact that only two of its batsmen — Craig Ervine (37) and Stuart Matsikenyeri (11) — managed double figures.

Put into bat, Zimbabwe found the going tough as Morne did the early damage by picking up two wickets in his first two overs.

Morne first went through the defence of opener Vusi Sibanda in the second over and then came back to induce an edge from Zimbabwe skipper Brendan Taylor which was gleefully accepted by South Africa captain AB de Villiers.

Morne’s brother Albie also found himself among wickets in his opening over when he had Hamilton Masakadza caught by Richard Levi at mid-on as Zimbabwe slumped to 16 for three.

Top-scorer Ervine and Matsikenyeri then tried hard to resurrect the innings with a fighting 35-run fourth wicket partnership before Jacques Kallis’ double blow in the 11th over put paid to their efforts.

In the fourth ball of the 11th over, Kallis first accounted for Matsikenyeri, who hit one straight to Robin Peterson at extra cover, and then had Elton Chigumbura plumb in front of the wicket with his next delivery.

But a hat-trick eluded the veteran South African as Graeme Cremer managed to keep the next ball away.

Kallis returned to the attack in the later stages of the innings to pick up two more wickets — Cremer and Ervine — both of whom perished in identical fashion giving away simple catches to De Villiers behind the stumps.

In between pace spearhead Dale Steyn also registered his name in the scoreboard, dismissing Prosper Utseya who was brilliant caught by a diving de Villiers to his left.(PTI)