Chris Gayle has gained one place and is now ranked sixth.

Mumbai: Following consistent match-winning performances in the ongoing World T20, India retained the top spot in the team’s ranking while star batsman Virat Kohli reclaimed the No.1 spot in International Cricket Council (ICC) T20 rankings. Kohli averages 92 runs per innings after scoring 184 runs in four matches in the tournament at a strike rate of over 132. He entered the tournament 24 points behind Aaron Finch, but has now opened up a 68-point advantage over the Australian.  Martin Guptill is New Zealand’s highest ranked batsman after the opener moved up two places to third following his contribution of 125 runs in three matches at a strike rate of over 162. T20 World Cup 2016: Virat Kohli races to No.1 spot in ICC T20 rankings

West Indies’ flamboyant batsman Chris Gayle has gained one place and is now ranked sixth after scoring 104 runs in two innings at a stunning strike rate of 208. England’s Joe Root has rocketed 38 places to a career high 11th after scoring 168 runs in four matches at a strike rate of 150. India (127 points), who will face the West Indies in the second semi-final clash in Mumbai on March 31, have retained the top spot in the team’s T20 rankings, while the West Indies (120) have gained two points to move to third. New Zealand (122) are second. In the first semi-final New Zealand will face England in New Delhi on March 30. Chris Gayle: Virat Kohli not the only focus of West Indies in T20 World Cup 2016, semi-final vs India 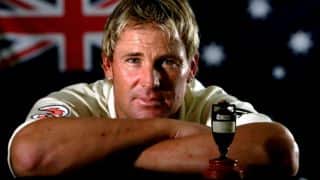