India s clean sweep of West Indies earned them three ratings points to remain at second place in the T20I team rankings with 127.

Kuldeep Yadav, the India wrist-spinner, has moved to a career-best 23rd place in the ICC rankings for T20I bowlers after moving up 14 places on the basis of a fine run of form this month.

Kuldeep was named Man of the Series in India s 3-0 sweep of West Indies – despite being rested for Sunday s final game – in which he claimed five wickets at an economy of 5.6.

Rohit Sharma, who led India in the series with Virat Kohli rested, jumped three spots to seventh place in the batting table after he became the first batsman to manage four centuries in T20Is. Shikhar Dhawan, Man of the Match on Sunday for scoring 92, gained five places to sit at 16th.

India s clean sweep of West Indies earned them three ratings points to remain at second place in the T20I team rankings with 127.

With 138 ratings points, Pakistan remain the No 1 team in T20Is after sweeping New Zealand 3-0 in the UAE, which came after the exact scoreline over Australia before that. The experience allrounder Mohammad Hafeez has emerged the big gainer across those three matches, with his 132 runs at a strike-rate of 145 taking him up 16 spots to occupy 53rd place in the T20I batting rankings.

Australia next play a T20I versus South Africa, followed by three with India. If Aaron Finch s team wins all four matches it will displace India from second place in the T20I team rankings with 126 ratings points. Should they lose all four, Australia will fall to sixth place. 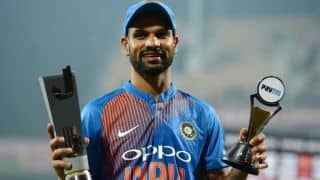