Prithvi Shaw and Manjot Kalra added 180 runs for the opening wicket for India in their opening match of ICC U19 World Cup against Australia.

India were off to a brilliant start in their ICC Under-19 World Cup 2018 campaign. Playing their tournament opener against Australia at Bay Oval, Mount Maunganui, it was Pritivi Shaw and Manjot Kalra’s brilliance that led India’s surge. Shubhman Gill played a magnificent cameo in the end to propel India’s total to 328.

Shaw, after winning the toss, did not hesitate to bat first on a seeming flat track. He, along with Kalra, started cautiously playing out first six overs for just 27 runs.  It was a six by Shaw against Xavier Bartlett that opened the floodgates for India. Shaw survived on 25, after a no-ball by Will Sutherland (son of CA CEO James Sutherland).

Soon, Karla went into fifth gear and took on Jack Edwards and Sutherland as India crossed the 50-run mark in the 10th over.

Shaw raced to his fifty in 55 balls, as the stand between Kalra and crossed the 100-run mark. Not to be left behind, Karla charged against Lloyd Pope and soon reached his fifty as well.

Both Shaw and Kalra were not afraid to employ the cut or the pull shot whenever the time aroused. It was Param Uppal and Austin Waugh’s resilience that pulled things back for Australia. Despite no boundaries, the runs did not stop for Shaw and Kalra.

The pair soon overtook Robin Uthappa and Shikhar Dhawan’s opening wicket record of 174 runs in U19 World Cup for India.

Shaw narrowly missed out on a well-deserved hundred, falling for 94. He gave a faint edge to Baxter J Holt to hand Sutherland his first wicket. Kalra too departed for 86, handing Jason Sangha a simple catch at mid-wicket off Uppal.

Shubman Gill and Himanshu Rana joined forces in the middle. Gill, who had been in scintillating form in domestic cricket, took charge.

He added 49 runs with Rana before the latter fell for 14. Rana trying to up the ante, gave Austin Waugh a catch at point. Gill rushed his way to a fifty in 48 balls inclusive of 4 fours and a six.

Gill was lucky to survive on 61, but Edwards off his own bowling removed him off the very next delivery. Anukul Roy departed for 6 — first wicket for Steve Waugh’s son Austin.

Some big hitting from Abhishek Sharma saw India cross the 300-run mark. He fell to Edwards for an 8-ball 23. This was also highest-ever total against Australia in an U19 World Cup, surpassing previous best by Ireland.

Kamlesh Nagarkoti and Shiva Singh added 22 runs before the latter fell to a nothing shot. He was beaten for pace by Edwards, his fourth wicket.

India closed their innings on 328 for 7 with Kamlesh Nagarkoti and Aryan Juyal unbeaten on 11* and 8* respectively. 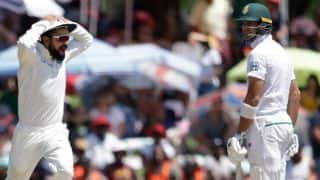