International Cricket Council (ICC) Chief Executive Dave Richardson on Sunday said that a clampdown on bouncers was unlikely despite the tragic death of Australian Phillip Hughes, according to a report. Hughes died on Thursday, two days after he was struck on the back of the neck, just underneath the headguard by a short ball in a domestic game in Australia. But Richardson said any clampdown on bouncers was “unlikely”.

“We need to try and keep our perspective. It’s a bit early to determine, but my initial reaction is that that’s unlikely,” Richardson told BBC 5 live’s Sportsweek when asked if the ICC would move to further restrict the use of the bouncer.

“People have died by being struck on the heart before. I don’t think cricket needs to over-react, but do what we can,” he said.

Former Australia wicketkeeper Adam Gilchrist said bouncers were part of the modern game, but that it may be time to look at whether modifications to helmets were needed. “I guess we could extend the helmet a little bit further down the back of the neck,” he said.

“We’ve always thought it is maybe the temple, the cheekbones, the skull itself that we needed to protect and that still remains but now we are going to look at any ways of curtailing blows to the neck,” Gilchrist was quoted as saying in the BBC report. 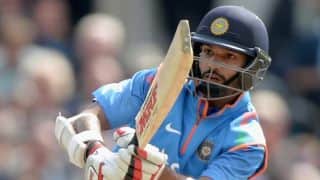