Afghanistan have kept their hopes alive in the ICC World Cup Qualifier by defeating United Arab Emirates (UAE) in the Match 6 of Super Sixes.

Afghanistan have kept their hopes alive in the ICC World Cup Qualifier by defeating UAE in the Match 6 of the Super Sixes. UAE opted to bat first but were bowled out for 177 in 43 overs. Afghanistan lost their way in the middle, but eventually managed to chase down the total under 35 overs.

Mohammad Shahzad was dismissed for 3. The in-form Rahmat Shah fell to Mohammad Naveed just after the Powerplay. This opened the floodgates as Afghanistan lost 4 wickets within 6 overs. Then Gulbadin Naib (74*) held one end up while Najibullah Zadran (63*) launched a counterattack. Naib joined in after the 25th over, and the match got over quickly.

Naveen and Qadeer Ahmed shared 4 wickets between them. UAE gave away 10 extras, an unpardonable sin when you are set out to defend a low target.

Earlier in the match, UAE never seemed settle in the middle as they kept losing wickets at regular intervals. Chirag Suri scratched his way to a 72-ball 22 with a solitary boundary. His long stay at the crease was got to an end by Rashid Khan in the 23rd over. At 84 for 5 it even seemed that UAE would not make it to 150.

However, Shaiman Anwar got a responsible 64 and Naveed smashed a 20-ball 45 (40 of which came in boundaries). Rashid both men and finished with 5 for 41.

Afghanistan will need to win their next match against Ireland and hope Zimbabwe to lose against UAE to qualify for ICC World Cup 2019.

Man of the Match: Gulbadin Naib. 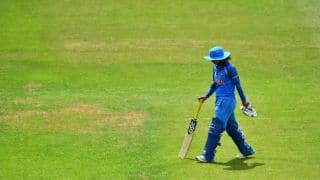