Mumbai: Indian opener Poonam Raut‘s father has expressed pleasure over the team’s crushing 95-run win over their arch-rivals Pakistan in the ICC Women’s World Cup encounter and heaped praise on his daughter by describing her as ‘great’. Poonam was the highest scorer for Team India as her 47-run knock helped the team to post 169 in their full quota of 50 overs, which ultimately turned out to be a herculean task for Pakistan, who were bundled out for mere 74 runs. Spinner Ekta Bisht was the star performer for the Mithali Raj-led side as she finished with the figures of five for 18 to guide her side to the third consecutive win in the tournament. WWC17: IND played like ‘warriors’ vs PAK, terms Vijay Goel

“The team performed really well yesterday. Ekta Bisht also displayed a good bowling performance. There was a lot of swing on the wicket. So, it was difficult to stay on the field for long. The Indian team also suffered a collapse. Only Poonam and Sushma Verma were able to remain at ground for some time. Ekta Bisht and Poonam performed really well. We felt really good,” Poonam’s father, Ganesh Raut said in an exclusive conversation with ANI. Ganesh further revealed that his daughter went through some really bad phase in last few years before working really hard, overcoming injuries and making her way back to the Indian team. Indian Eves’ win against Pakistan in ICC WWC17 inspires Kohli, Team India: Sanjay Bangar

“Poonam’s first tour came against Australia, where she played only one match and got dismissed for a duck. She struggled a lot since then. She had a bad phase of about one or one and a half year. The way she overcame injuries and made a comeback is incredible. She is great,” he emphasized. India will now play their next ICC Women’s World Cup encounter against Sri Lanka at Derby on June 5. 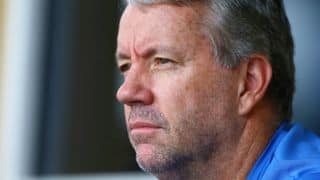