India did what conventional coaches inculcate: stick to basics. The batters played with a straight bat, keeping wickets in hand. The bowlers hurled at the stumps, making the batter cramp for room. The captain stationed fielders close to the batter, exerting more pressure. The result was an easy 95-run win over Pakistan. However, India were put on the back-foot in the fourth over, losing the in-form Smirti Mandhana for a mere 2. With ball moving both ways, India could have stared further down the barrel, but Punam Raut scored a patient 47 off 72 and kept Pakistan at bay. Riding on her resilience, India managed 169 for 9 amidst a disciplined bowling that saw Nashra Sandhu take 4 for 28.

Sana Mir got almost everything right in the first innings. She set a 7-2 field to choke the Indians and make them succumb to her strategy. That said, Raut and Deepti Sharma did not fall for any of Pakistan’s ploy. They instead kept the wickets intact and laid a strong foundation for the middle order.

Raut was racing to her second half-century of ICC Women’s World 2017. She had found her feet and was looking good for a big score, but in the pursuit of working the ball on the leg-side, she induced a leading edge straight to Nashra Sandhu.

In came Mithali Raj after a brief period of reading and smoked a four off the first delivery. The platform was laid and the ball had lost its shine. However, Nashra outfoxed her with the slowest delivery she could hurl and trapped her lbw. In the same over, India lost the set Deepti. From 73 for 1, India were quashed to 94 for 4.

Pakistan made further inroads, removing Harmanpreet Kaur and Mona Meshram for 16 runs combined. Thus far, youngster Diana Baig had spectacularly fielded, Sana Mir had taken a blinder at short mid-wicket, and the bowlers had given very little respite to the Indians. The same modus operandi continued until the end of innings, but only a few of it had effect on wicketkeeper-batsman Sushma Verma who bludgeoned 33 to take India to a competitive total on a sluggish Derby track.

Before this match, Pakistan had failed chasing five times against India. Although they had drawn enough confidence to turn the tides, they were mindful of the fact that they were against India’s array of bowlers.

Mithali Raj was as sharp with her ploy as Sana Mir was. She counterattacked with a pace-spin gambit: Jhulan Goswami from one end and Bisht from the other.

India did not take long to draw first blood. Coming round the wicket, one of Bisht’s deliveries held its line and caught Ayesha Zafar in front. 2 overs later Goswami inflicted a similar mode of dismissal to sent Javeria Khan packing.

Indians kept bowling straight and the next two wickets were lbw as well. A wicket after wicket, and Pakistan were six down within 15 overs. Opener Nahida Khan was still at the crease, but Harmanpreet victimised her with spin.

Sana Mir, as evergreen as ever, tried to play a lone hand. She even added 23 runs for the 10th wicket with Sadia Yousuf — the highest stand of the Pakistan innings. However, Mansi Joshi had her bowled with a yorker and ended Pakistan’s misery for 74.

Player of the Match: Ekta Bisht 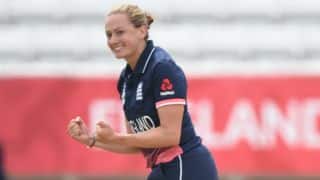