Cameron White has once again staked claim for a middle order spot in the Australian  limited over side courtesy a match-winning 41 that helped Australia clinch the Twenty20 International (T20I) series against South Africa.

With the ICC World Cup 2015 just around the corner White scored a timely 41 that not only helped Australia seal the T20I series against South Africa but has done his world cup chances no harm whatsoever, as reported on the official Cricket Australia website. White seems to have carried form from last year’s Big Bash League which saw him open the batting for the Melbourne Stars into his international return for Australia. The fact that the runs came in a pressure situation with the series on the line and with injuries being part and parcel of the modern game because of the packed cricket calendar, he’s giving himself a fair chance.

“Over the last 12 months (I’ve) opened the batting in T20 a bit. Now I do have that flexibility to bat wherever I’m needed. Given the chance to open the batting simply means I can bat wherever required,” White was quoted saying. Taking nothing for granted though, he recognizes that the Australian team is probably one of the hardest squads to break into.

Australia’s T20I skipper Aaron Finch heaped praise on the Victorian and is confident that given the right circumstances White can certainly make it to the World Cup squad. He said, “I think his record for Australia speaks for itself. When you look at that it’s been pretty outstanding for a long time, I think about a hundred one-day games. The side at the moment there’s some quality players in there.  I think it takes a bit of luck at times to find an opening in the team.” 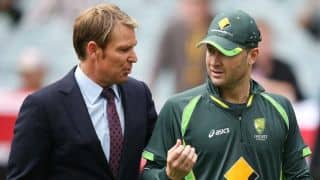