MS Dhoni will be India's trump card at the World Cup because of his vast experience, reckons former Pakistan skipper Zaheer Abbas.

“Brain” of his cricket team, Mahendra Singh Dhoni will be India‘s trump card at the World Cup because of his vast experience, reckons former Pakistan skipper Zaheer Abbas.

His lightening skills behind the stumps are still intact but his image of world’s best finisher has taken a hit. However, Abbas said at a big event like World Cup, Dhoni’s experience will count a lot.

“India has a genius called Mahendra Singh Dhoni in the team. He is the brain of cricket in the team. He understands the game so well and has experience of leading India in two WC wins. His experience will be vital for captain and coach and he can be their trump card,” Abbas said,

“Also, it is the first WC under Virat Kohli’s captaincy and he would be eager to prove his mettle as a captain,” he felt.

Abbas also said the pitches in England will suit strong Indian batting line-up where 400 or 450 runs in an innings could be a possibility. “We have seen that in the recently-concluded Pakistan-England series, that over 300 runs were scored and chased. Now in World Cup, 450 runs could be a possibility as there is no grass on the wickets and bowlers will get little help from the conditions,” said the stylish batsman who was called Asian Bradman during his playing days.

“In such scenario, India will benefit as they have one of the strongest batting line ups. English wickets are now batsmen’s paradise,” he added.

There has been a lot of talks about who should bat at no 4 for India but Abbas said there should not be many changes in the top order. “It is purely captain’s decision but my view is that top four batting order shouldn’t be changed frequently. You can make changes in the lower middle order but not at the top,” said the veteran who has played 78 Tests and 62 ODIs for Pakistan between 1969 to 1985.

Pakistan, Australia, England and New Zealand are the top contenders for the semifinals apart from India, according to Abbas. “Fitness will be the key in this WC given the format and the weather in England. I think that the fittest teams will reach the last four.”

When asked about Pakistan team which has seen some last moment changes in the final squad, Abbas said that this is the “best possible combination”.

“They should now forget the loss against England and focus on World Cup. They must improve their fielding, said the veteran.

Pakistan could not win a single WC match against India so far. Can the team break this jinx this time? “Record is with India but Pakistan can beat any team on their day. It will depend on who handles the pressure well. It will be the match of the tournament for sure, no matter who wins.”

India and Pakistan will lock horns on June 16 in Manchester. “For me, Indo-Pak cricket rivalry is much-much bigger than Ashes and like every cricket fan, I am eager to see that match,” he said. 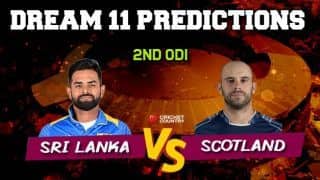