Zimbabwe came into the ICC World Cup Qualifiers 2018 as one of the favourites.

Hosts Zimbabwe came into the 2018 World Cup Qualifiers as one of the favourites. In their opening Group B match against Nepal, they opted to bat first and managed to put up a mammoth 380 on board courtesy hundreds from Brendon Taylor and Sikandar Raza. Nepal in reply, were always behind the asking rate despite fifties from Sharad Vesawkar and Aarif Sheikh. They eventually lost by 116 runs.

Nepal lost their first wicket in the 4th over, when Gyanendra Malla was bowled by Tendai Chatara for 2. Chatara bowled an excellent opening spell that included 2 maidens and a wicket. Vesawkar and Sheikh provided some late momentum, but it was too late for Nepal. 380 was always a huge total for them as they lost by 116 runs.

Raza took take 3 for 48 in his 10 overs. This included that of superstar Paras Khadka, who was looking in good touch. Brian Vitori supported Raza, with 2 for 46 from 8 over.

Zimbabwe had a superb start, racing to 51 in 4 overs with 9 boundaries. They eventually made 87 in Powerplay. Cephas Zhuwao, who opened the batting with Solomon Mire, played well for his 41 before falling prey to Sandeep Lamichhane. They touched the 200-mark in the 31st over with the loss of 4 wickets.

Craig Ervine was finding it difficult to get the ball away as he ended up scoring 34 off 50 balls with a solitary four. Brendan Taylor, who was scoring at a slow pace, accelerated once Raza came to bat. Raza was among the leading run scorer in the Tri-nation series that involved Sri Lanka and Bangladesh. He continued his form and scored quick runs.

Taylor scored a hundred at almost a run a ball, but it was Raza’s hundred that set the tone for Zimbabwe. Raza reached triple-figures in 59 balls. He smashed 19 runs off the 39th over. He eventually fell in the 49th over, for an 80-ball 123. Taylor fell next ball, for 100. The two batsmen stitched a partnership of 173 runs. 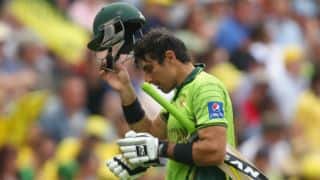 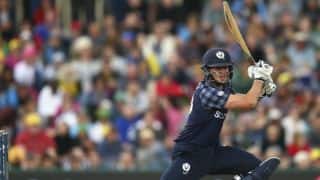