Shehzad had struggled to make his mark in earlier games in World T20 2014.

Young Ahmed Shehzad, who on Sunday became the first Pakistan batsman to score a century in all three formats, took a dig at his critics by dedicating his knock to all those who have criticised him after a couple of failures.

“It’s for all my critics who has spoken a lot of harsh things about me. There are a lot of people back home who had a lot to say after a couple of failures. I dedicate this century to all those people,” Shehzad said in a content tone as his skipper Mohammed Hafeez and media manager Zakir Khan found it hard to suppress their grin.

Immediately as an after-thought, he said that it was also for his “fans, who had loved him”.

Shehzad had scores of 22 and five in the two matches against India and Australia before his 59-ball ton. He also surpassed his Pakistan record of 98 not out scored against Zimbabwe at Harare in an earlier Twenty20 International (T20I) match.

“I had always dreamt of becoming the first Pakistani player to score a century in all three formats. Prior to this match, I was listening to so many things but then the coach and the captain gave me a lot of confidence. I had a plan as I decided to pick up certain bowlers and go after them,” the 22-year-old said.

Shehzad however termed his 98 at Harare being a special one as it helped him cement his place in the national side.

“Harare innings was special as my place in the One-Day International (ODI) team was still not certain. Today, when I was batting on 70-odd, Shoaib Malik came up to me and said that ‘you will easily score a century today’. That gave a lot of confidence. Shoaib bhai had a lot of hand as his running between the wickets was fabulous. My captain had sent me a message that I need to stay till 20th over and also let the others rally around me,” Shehzad stated.

Criticism had certainly affected the youngster which was evident by another statement.

“Agreed the margin of error for bowlers is very less but in T20s, even the batsmen need to improvise. There will be days when some shots will come well and some days it won’t. My humble request to all those experts and critics is that please don?t judge a young player on the basis of one or two innings and be careful about what you say,” he said.

He spoke about how he disturbed the bowlers with his improvisation.

“I tried the paddle sweep behind square and it didn’t come off. Sensing that, opposition got their cover fielder inside the circle and pushed the short fine leg deeper. Then I hit two cover boundaries. That is called innovation,” he said.

Bangladesh captain Mushfiqur Rahim was distraught as he failed to offer any new explanation for his team?s disastrous performance and went to the extent of admitting that his team does not have the ability to beat top sides consistently in this format. 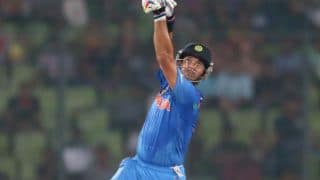