Mahela Jayawardene‘s magnificent 89 and Tillakaratne Dilshan‘s 55 helped Sri Lanka to post a massive total of 189 for four against England in the ICC World T20 2014. The duo shared a 145-run partnership for the second wicket in the Super 10s Group 1 match at the T20 World Cup at Chittagong on March 27.

It was not a great on the field for England as they dropped four catches to add to their misery. England came into the match needing a win to keep semi-final hopes alive. They had lost their first match against New Zealand. Sri Lanka had won both their matches against South Africa and the Netherlands.

England captain Stuart Broad had won the toss and elected to bowl first. Dilshan and Kusal Perera opened the batting for Sri Lanka. Moeen Ali bowled the first over with his right-arm off-spin. Jade Dernbach struck in the second over. He bowled a back of a length delivery down the leg side and Perera went for the pull. The England players appealed as Jos Buttler collected the ball. The umpire raised his finger and Perera was out for three. Replays showed that he had not edged the ball.

Jayawardene was the next batsman in and top-edged a straight delivery to cover. Michael Lumb dived forward and claimed the catch. The replays showed that Lumb might have taken the catch cleanly, but the third umpire ruled in favour of Jayawardene. So, it seemed like the umpires had got two decisions wrong in two deliveries. The decision did not please Dernbach, who argued with the on-field umpire.

Chris Jordan came in the sixth over and bowled a full delivery at the stumps. Jayawardene flicked the ball brilliantly through square-leg for a four. Dilshan seemed to be struggling to get his game going. He tried to hit his way out as he charged down the ground to James Tredwell. But his straight drive was half-stopped by Tredwell and he only got a single.

Tredwell bowled the 11th over. Jayawardene came down the track and struck a four through wide long-on. The next ball was swept by Jayawardene for another four behind square on the leg side.

In the 13th over bowled by Tredwell, Jayawardene plays a reverse-sweep and gets a four through third-man. That got him his ninth half-century in T20Is. He then came down the track and lofted one from Tredwell for a big six over long-on. That brought up the 100 for Sri Lanka.

The 100-run partnership between the duo came up in the 14th over. Jayawardene was batting sublimely as he cut a short and wide delivery from Bresnan over backward-point for a four. The next ball was struck for a six towards wide long-on.

Dilshan then struck two fours in the 16th over bowled by Broad and reached his ninth half-century in T20Is. Bresnan redeemed himself a bit with a diving one-handed stop at the deep cover boundary to not allow Jayawardene get a four. But Jayawardene was in a class of his own as he flicked a full and wide delivery from Jordan behind the short fine-leg fielder for a four.

Jayawardene was eventually bowled with a slower delivery from Jordan. He departed for a brilliant 89 off 51 deliveries with 11 fours and three sixes. The 145-run stand between Jayawardene and Dilshan came at a healthy run-rate of 9.45. That didn’t stop Dilshan, who played another dil-scoop over the wicketkeeper for a four.

But next ball, Dilshan mistimed a pull shot to a short delivery to Jordan at deep mid-wicket. He was out for 55 off 47 deliveries with four fours and two sixes. Thisara Perera took over the scoring as he hit a four over extra-cover and then pulled one for six over deep mid-wicket in Dernbach’s last over.

Kumar Sangakkara was out first-ball trying to hit his first delivery over extra-cover. Jordan was the bowler and Alex Hales was the catcher. Ravi Bopara also dropped a catch in the last over bowled by Bresnan at wide long-on. Thisara Perera was the batsman who got away. He then got a four over the short third-man fielder. Angelo Mathews smashed the last ball of the innings over deep mid-wicket. Sri Lanka had posted a commanding total of 189 for four. 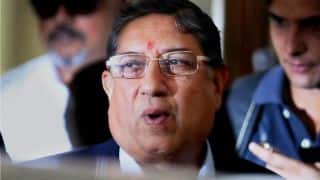