Nepal won their Group A qualifying encounter of World T20 against Hong Kong by 80 runs.

Nepal won their Group A qualifying encounter of ICC World T20 2014 against Hong Kong at Chittagong by a convincing margin of 80 runs. It was an all-round effort from the Nepal setup that helped them win the game. Both spinners, Basant Regmi and Shakti Gauchan were in impressive form by taking three wickets each for Nepal.

Nepal captain, Paras Khadka praised both spinners by saying, Shakti [Gauchan] and Basanta [Regmi] are our best bowlers. The ball was skidding and they used the conditions pretty well. We were 10 to 15 runs short batting wise but the bowlers did a good job, as reported by The Himalayan Times.

Gauchan, who was interviewed by former New Zealand pacer, Danny Morrison after the game said, The pitch today supported bowlers and it especially favoured my style. I am happy to deliver for the country.

Both spinners will be expected to play a key role when they take on the hosts, Bangladesh in their next encounter. 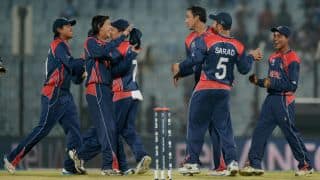 ICC World T20 2014: Nepal’s body language indicates it could be first of many wins on their road ahead 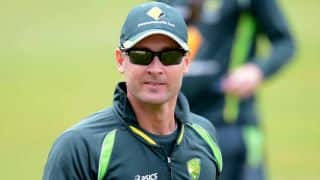