England produced a hapless batting performance as they were shot out for 88 in 17.4 overs.

Netherlands relived the fond memories of their win in 2009 against England, as they shocked England once again in the ICC World T20 by 45 runs in the 29th match at the Zahur Ahmed Choudhary Stadium in Chittagong.  Chasing a modest target of 134 to win, England produced a hapless batting performance as they were shot out for 88 in 17.4 overs as Netherlands signed off with an impressive win.

In a modest chase of 134, England were off to a disastrous start as they lost as many as four wickets at a paltry total of 32 after 8.1 overs. In the third over, left-handed Michael Lumb was trapped in front of the wickets by Bukhari for six off eight balls.

The right-arm seamer was in action once again when he cleaned up the dangerous Alex Hales for 17, on the first ball of the fifth over. Hales’s wicket sparked a collapse as England slipped from 19 for one to 49 for five after 11 overs.

In the sixth over, Eoin Morgan was caught in the slips by Netherlands captain Peter Borren off Timm van der Gugten. The Dutch captain deserved all credits for the wicket as he made his bowler bowl in a certain line and position himself at a wider third slip to effect that dismissal.

Moeen Ali and Jos Buttler teamed up as they had the responsibility to bail their side out of trouble. But, Borren’s another masterstroke ensured that Netherlands maintain their stronghold over the game. The right-arm bowler got Ali caught by Tom Cooper at covers in the ninth over, and England slipped to 32 for four after 8.1 overs.

Buttler played a reckless shot on the final ball of the 10th over, as he picked Pieter Seelar off van Beek as England were left reeling at 42 for five. The run-out of Tim Bresnan in the 12th over worsened their situation.

For a good part in England’s innings, their batsmen failed to pick up boundaries, which resulted in the required run-rate touching almost 12 an over. Ravi Bopara and Chris Jordan did well to steady the ship, but their scoring rate was not good enough to keep their side in hunt.

Bopara succumbed to pressure and so did his partner Jordan. Both fell in the 16th over to van Beek as England stared a humiliating defeat. On the first ball, Bopara was caught at the deep midwicket by Seelar, and on the fifth ball Jordan was caught by Michael Swart.

Earlier in the day, Wesley Barresi’s fine knock of 48 and Stephan Myburgh‘s quick 39 helped Netherlands post a modest total of 133 for five.

The Netherlands made a quick start after being put in to bat first by the England captain Stuart Broad, but lost the momentum provided by the top order and could only manage 27 in their last five overs. Barresi faced 44 balls to score 48, studded with two boundaries and as many sixes. The other top-scorer in the innings was attacking opening batsman Myburgh, who struck 39 off 31 balls early on.

The Netherlands were off to a flying start as they garnered as many as 32 runs in the first three overs of the game. Myburgh led their charge early on. In the first over of the match he smashed three boundaries off England part-time spinner Moeen Ali. All three fours were hit down the ground, which once again showed the Dutch opener is in excellent form.

Man of the Match: Mudassar Bukhari 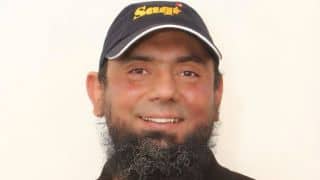