Dwayne Smith, who opened with Gayle, slammed four fours and two sixes before the latter was dismissed by James Tredwell.

Just when it seemed that the duo would guide the team to victory, Smith was caught by Jade Dernbach off Tredwell’s bowling.

Jonathan Charles was the next man to come. He scored seven from 18 balls but in the 14th over of the match he was bowled by Ravi Bopara.

Senior and experienced cricketer Marlon Samuels didn’t last long, as he was dismissed for two runs by Stephan Parry.

Earlier, stand-in skipper Eoin Morgan scored an unbeaten 43 to guide England to a safe total of 131 for the loss of seven wickets.

England won the toss and elected to bat against West Indies on Tuesday. Michael Lumb and Alex Hales opened the batting for England.

Lumb smashed three boundaries in the first over of the match, scoring 14 off six balls. However, on the last ball of the over Krishmar Santokie bowled him.

Moeen Ali joined Hales at the creasebut he couldn’t last long either. Ali scored 22, smashing four boundaries before he was dismissed by Sheldon Cottrell.

Hales was the next to go as he was caught leg before by Samuel Badree. Hales scored 25 off 12 balls, which consisted of only one boundary.

England wicketkeeper Jos Buttler and Morgan then stood there, building up a 33-run partnership.

Buttler was going well before Andre Russell dismissed him. Buttler scored 22 runs off 20 balls.  Ravi Bopara was the next man in. Just when Bopara seemed to have settled down, he was removed by Cottrell in the 17th over.

Tim Bresnan didn’t last long as he was dismissed by Santokie for a duck. Jordan was the last batsman to be dismissed.

For West Indies, Santokie was the pick of the bowlers, taking three wickets from his four overs. Cottrell picked up two wickets. 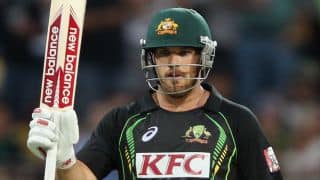 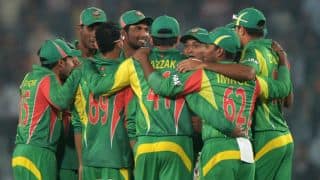