Yuvraj's fitness is of prime importance to Dhoni and Fletcher.

There was a good news for India ahead of the ICC World T20 2014 semifinal as in-form Yuvraj Singh batted for the longest time during the team’s net session in Fatullah on Thursday, giving the coach and captain a chance to assess how his injured ankle was shaping up before Friday’s crucial match.

India play South Africa in the last-four stage of the tournament.

While there is no official word on his availability for the game, his stint at the nets was indication enough that he was fit to play.

“Yuvraj is fit to attend practice today,” media manager Dr R N Baba had said at the press conference prior to the team’s departure to Fatullah for the net session. Yuvraj had suffered an injury to his left ankle while playing barefoot football during a training session a couple of days back.

Like yesterday, soccer was not a part of team’s training session today as the players again headed towards the nets on arrival.

While Yuvraj walked around gingerly, he apparently showed little signs of discomfort during his half an hour session at the nets. Yuvraj easily spent the longest time at the nets while some of the other top batsmen like Mahendra Singh Dhoni, Virat Kohli and Rohit Sharma wrapped up their session quite quickly. None of them batted for more than 15 minutes and the emphasis was on hitting big sixes at the nets.

The footwork was perfect as he lofted the spinners coming to the pitch of the ball and looked at ease against pacers also.

While he was most comfortable while batting, he did take part in the fielding session for some time and also took some running catches even as physio Nitin Patel kept a close watch on his progress. 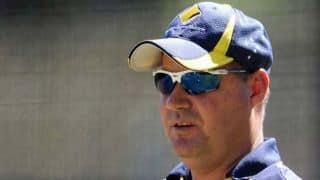